After nearly 12 years of posting and 559 posts, I have finally had enough of Blogger and moved to Wordpress. You can now find me blogging at:

Blogger seems to lack huge amounts of functionality these days, plus no longer has apps available to use on phone or tablet, which seriously hindered my posting now that I have LO. I have used Wordpress for several years in my professional existence and really like what you can do with it, plus I already had an unused blog over there which I used for a joint blogging thing about a decade ago. The time came to resurrect it, and turn it into my blog.

So, thank you for reading my blog over here, and please come and find me in the new place!
Posted by Daisy at 3:33 pm No comments:

I didn't get round taking pictures on the first of the month, but these were taken just before Christmas.

The lawn is looking very green with all the rain it's had. 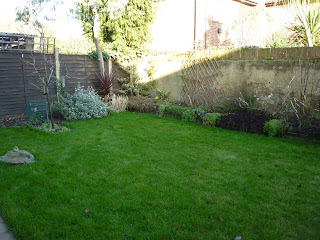 The grasses at the side are dying down now it's cold. 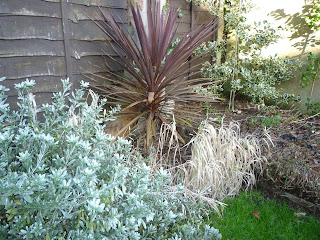 But there are some signs of life - Clematis 'Wisley cream' is just coming into flower! 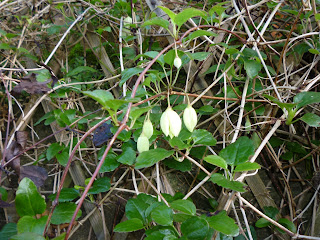 The Japanese anenome is covered in fluffy seedheads. 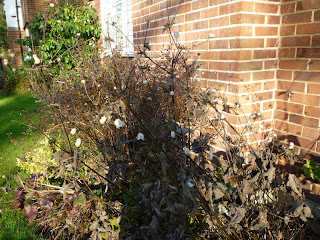 And something else coming into flower! The Daphne is about to flower for the first time. 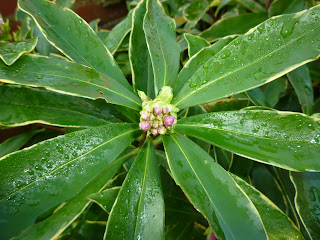 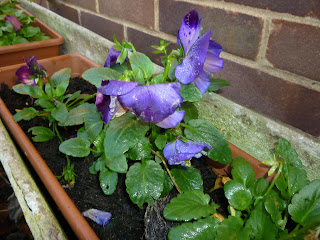 The Sarcococca  is about to flower too. 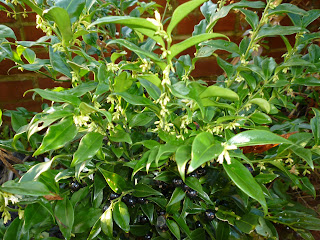 Garden at the beginning of August - October 2016

I got really behind with my garden at the beginning of the month photos this year. Once LO was mobile it was hard to get outside with a camera and take pics, and then get them transferred onto my computer and edited for a blog post. So, this is a quick round up of some of the pictures I took.

One of LO's Christening presents - beautiful flowers, it's a stock called 'Joy' from RHS Wisley. 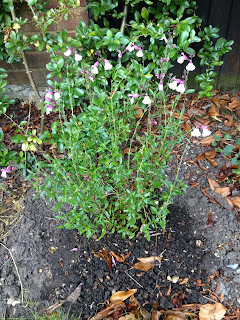 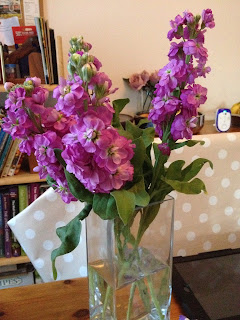 The OH watering the garden during a dry spell. With some assistance from LO who liked moving the hosepipe. 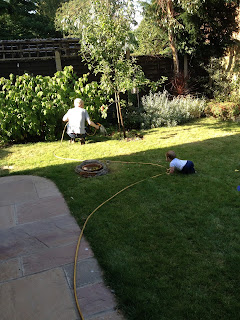 September
Beginning to look a little Autumnal, and the colours are fading a little bit. 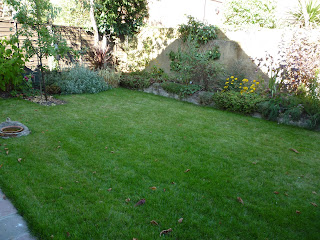 Apples ripening on the standard tree. We did well for apples this year, although they came out quite small - didn't have enough rain at the right time. 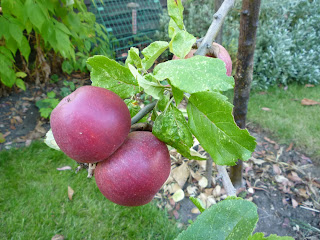 Ripening apples on the espalier tree. This is a different variety which ripens later. 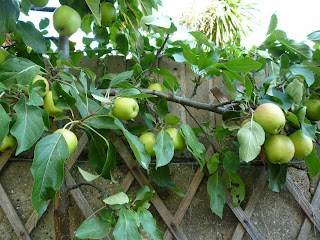 The Japanese anenome in all its glory. 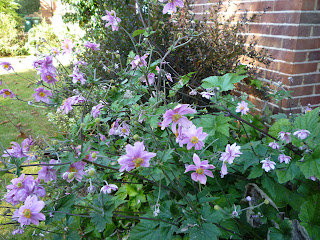 One of the fuchsias 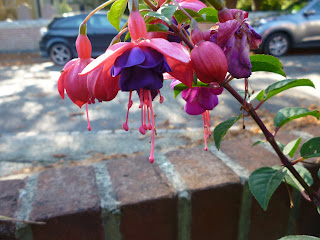 The sedums just coming into flower. 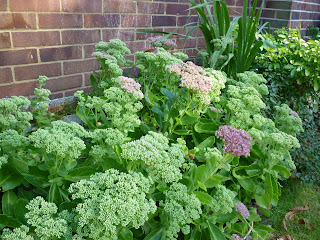 Some of the Pyracantha berries. 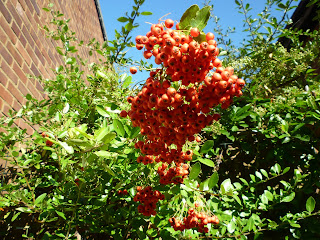 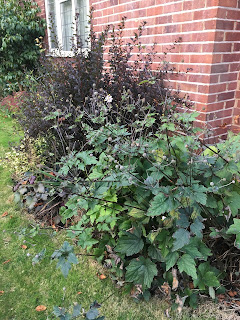 I anticipated not getting much knitting done in 2016, thanks to having LO towards the end of 2015. But I was delighted to find this wasn't the case! LO turned out to be a champion sleeper, which meant we got our evenings back relatively early on, and soon eased back into our previous routine of finishing the evening with an hour's TV and knitting on the sofa. So, I've enjoyed some really good TV this year (The Missing, Homeland (OK, that was the previous year but we recorded it as didn't want to watch it accompanied by a howling newborn), Deutschland 83 were particular highlights, but we also got through the whole of the first series of Outlander and part way into the second series.

What I did struggle to find time for was actually planning knitting projects. I was on maternity leave for all but three days(!) of 2016, but there wasn't much time for getting out different yarns, swatching, carefully browsing Ravelry and selecting a pattern. Which means there has been a LOT of sock knitting in the last year, as it was easier just to go into the sock yarn box, grab a ball and get on with a straightforward pattern.

I already blogged earlier in the year about earlier knitting projects, so this post is to bring us up to date.

I made a Pocket Ted for my God-daughter's birthday. It was very fiddly to knit, but she seemed to like him, so it was worth it. The pattern is a good one, it's fiddly because it's so teeny tiny. The tin formerly contained travel mints. 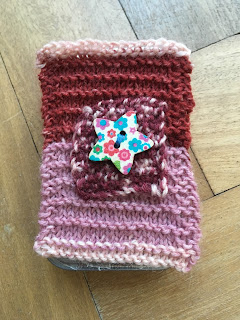 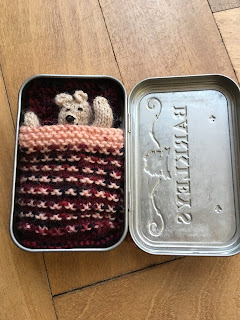 Gemini was my big garment project of the year, knitted in Mirasol Yarns Lachiwa, which I'd bought on sale a few years ago, so this was a stash project too. The yarn is a lovely linen/cotton mixture and good to knit with. I only got this blocked over Christmas though, so won't be able to wear it until the weather is a little warmer. 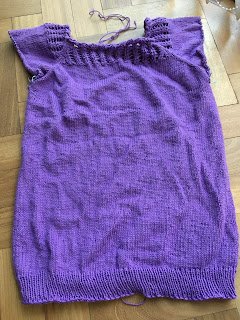 One of my more recent projects was a Sensory Caterpillar for my Godson, who has special needs. This was a fun pattern to knit, and I used Stylecraft Classique DK 100% cotton as it's available in bright colours and is sold in the local haberdashery. There is a rattle in one end, and a squeaker in the other, but I couldn't get the squeaker to squeak at all! 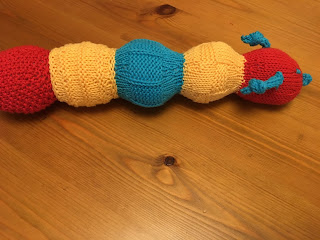 Oops, photos out of order, but it's already taken long enough to do this blog post so I'm not going to start rearranging now. This is Gemini blocking. 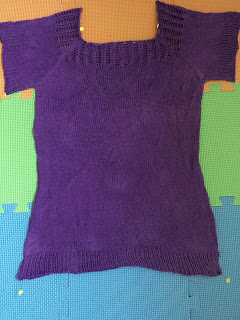 And, finally, some fun things I've received! This was my return-to-work present from Mostly Knitting. Cool or what?! (well, actually nice and warm as it was rather chilly on my return to work). 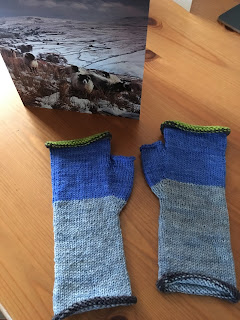 A yarny Christmas present - a skein of Countess Ablaze Lady Persephone sock yarn. The photo doesn't really do justice to the depth of colour in this yarn. 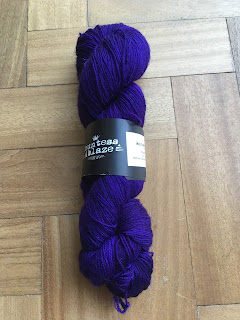 And my current project! I wanted something different for self-striping sock yarn, so found the Tootsie Rolls pattern. Simple and fun to knit, and works really well with those stripes after a bit of trial and error. The yarn is West Yorkshire Spinners signature 4ply yarn in the Holly Berry colourway, which seemed appropriate for the time of year. 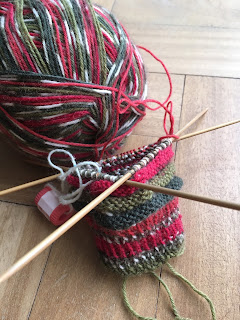 I have become slightly addicted to WYS yarn this year, which is probably why I haven't managed to knit up more than I've acquired. Although I would have done if I hadn't been given the Countess Ablaze yarn for Christmas. See, unexpected present, I hadn't planned for that... Apart from the sock yarn, the only purchases have been for presents, and I've only used part balls from the cotton which explains why the stash has grown more than I anticipated.

I'm anticipating a lot more knitting from stash in 2017, as how much does childcare cost?!?!?!?! So, I'll be aiming to do the majority of my knitting from stash next year, with purchases limited to presents and things I need in addition to stash for particular projects (for example, I want to knit a jumper for LO to use up some DK I have in my stash, but I only have two balls left so will need to buy a little more to have enough). I'm also going to be interested to see how much knitting time I get now that I'm back at work as the evenings are all a bit of a gallop now of work, commute, hurtle to nursery, hurtle home.

What are your knitting plans for 2017?