is not going well. Mainly because I have a really stonking cold (Anne is very good at blogging with a cold, I can't make the words come out right, but she manages to spell them so they sound like you have a really stonking blocked up bright red nose). I think I also have an image problem. There are a few too many stereotypes attached to being a knitting Christian librarian, or a librarian who knits and also happens to be a Christian, or a Christian librarian knitter. Typical conversations with potential flatmates go something like this:
PF: And what do you do?
Me: I'm a librarian.
[slight pause]
PF: This isn't a quiet household, you know.

Since when has a librarian been QUIET?!?!?!? Grrrr. I have only viewed one place so far, on my first night in London, just before the cold turned up. It was TINY. As in cupboard-size, with just about enough room for a single bed and a tiny wardrobe but no room for anything else at all, including Monkeys. 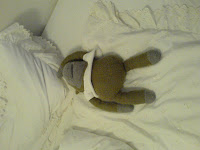 Monkey also has the cold (although he thinks it's flu). We're both in London for the week to catsit Gypsy and to do some flat hunting. 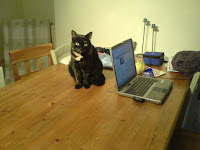 Gypsy doesn't have the cold and still thinks she should be fed on time, despite the fact that Monkey and I both have it. I had to cancel yesterday's flat viewings, after coming over all wappy on the Hammersmith & City en route to Paddington. It is getting slightly worrying, as I want to move house in 10 days' time and so far have only viewed one place...

There seems to be mountains of stuff to do before that. I've finished working on-site, but I still have some work to do, plus a lot of paperwork to finish off for various things. Plus all the boring nitty gritty life things that I want to get finished before I start the job - so far the car has been serviced and I've been to the nurse for my check up, but there is still the boiler to be serviced and the dentist to get to and the last few things to finish off in the house in Newark - curtains, and bookshelves. Oh, and my washing machine (with a perfect sense of timing) packed up last week. If it had lasted three weeks more I wouldn't have needed to use it. Fortunately I was heading over to Mum's for the night to see the nephew sprogs, just before coming down to London, so I took three loads of washing with me. 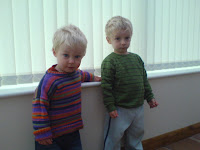 Dylan (on the left) is now wearing the jumper I knitted for Noah's first birthday/Christmas. I'm really impressed with how it's wearing. It's Regia 6ply Crazy Color, and it doesn't seem to have bobbled or pilled at all, despite being washed upteen times. I think I'd do a sprog jumper in sock yarn again as it seems to wear better than ordinary machine washable yarn.
I also suspect the cold came from these two, as I had to take the car out in the middle of the night to the midnight pharmacy to get Nurofen for Kids for Dylan!

Monkey's cold (sorry, "flu") must have come from this lot: 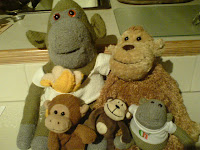 Yes, the nephew sprogs have monkeys too now... The large hairy specimen with the big grin on the right (surely that's a gorilla?) is from the Eden Project, where Dylan fell in love with him two weeks' ago.

Knitting is going slowly, I'm not sure if I'm going to get the Christmas stuff done as I seem to be running short of time as usual. I did get a mobile phone sock finished for James though: 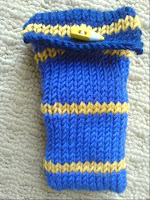 I found the pencil button at Boyes. Isn't it cool?!
I think that's it for now. I was hoping to go to the Stitch n Bitch Day in London tomorrow and meet up with a few people but I'm not sure if I'll make it now (and I don't want every knitter in London to end up with the cold too), as I've had to re-arrange some flat viewings for this weekend. Obviously it's OK to pass cold germs onto potential flatmates. ;-) Here's hoping that these rooms won't be as tiny...
Posted by Daisy at 2:23 pm 18 comments: