Isn't this cool? It's Lorna's Laces Shepherd Sock Multi in flamingo stripe, which I got from someone on Ravelry in exchange for my Yarn Forward free gift yarn (I reasoned I was unlikely to use something in lime green laceweight). My work colleagues were rather amused when yet another soft, squishy parcel arrived... 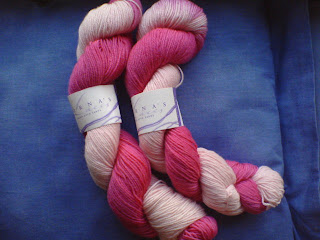 I have been knitting busily away but haven't got any pictures to show for it yet. I'm making another pair of bootees (is there something in the water or am I imagining the fact that EVERYONE is having babies this year?!) for my other boss' baby, which arrived last week. But I forgot to take a pic of the bootees this afternoon so that'll have to wait for my next post. I have also finished a pair of socks, but they're for the Secret Prayer Sock Exchange on the Ravelry Christian Knitters and Crocheters forum so I can't reveal anything about them until the swop has taken place. I don't need to post them off for another 10 days. That's been fun though - the idea is that you pray for your partner at the same time as knitting them a pair of socks (and meanwhile someone else is knitting and praying for you). It felt a little odd at first as I normally knit in front of the TV or radio, but it soon became easier.

I have also been busy in the kitchen. I'm loving my veg boxes from Riverford and last week a large bunch of basil was included, so I had my first attempt at making pesto: 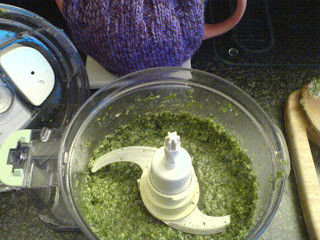 It was very tasty, if slightly hair-raising, as my kitchen scales got broken in the house move so I just had to fling ingredients in with wild abandon and hope it all turned out OK. Which it did. The veg boxes are being delivered to work and my colleagues are also getting used to me running up and down the stairs shrieking "Look at my mini cucumbers!" when the box arrives each week...

Meanwhile, I've had plenty of visitors. Mum came to stay for five nights, during which I was mostly at work but we also had time to explore Cliveden 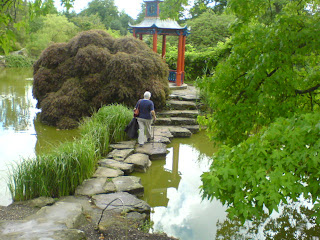 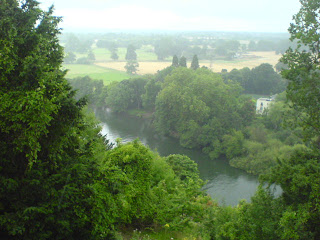 mainly in the rain. Bizarrely Monkey also took to doing the washing up every day whilst she was staying but he stopped as soon as she left so now I find it all still in a pile in the kitchen when I get in from work.

Helen came to stay for a couple of nights, during which we went over to Royal Holloway where we first met ten years ago (scary, where did the time go?!), did a bit of scone eating (look at the SIZE of them?!?!) at Savill Garden 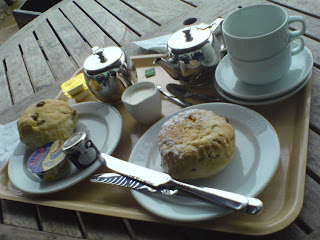 and also walked a few miles at Burnham Beeches. 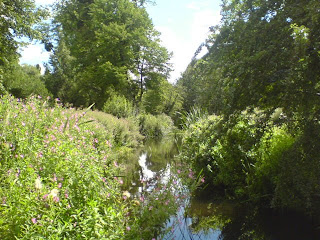 As you can tell, I've got a bit more bounce about me now, which is A Good Thing. I'm still taking things relatively easy and gradually increasing the amount I'm doing. I was really pleased this weekend as I drove over to Chelmsford to visit two friends over there and managed to get there and back in the car! I had a panic attack on the A1 two months ago (which is around the time I went off sick) and didn't drive for three weeks after, and now I'm easing myself back into it. I've been driving to and from work for six weeks now, and it's been fine, and I've also been zipping up and down the dual carriageway in Slough with no trouble. Yesterday I managed three junctions of the M4, and then one of the M25 before I bottled out and ended up going to Chelmsford via a slightly more circuitous route than intended (well, the obvious way between Slough and Chelmsford obviously is via Amersham, Watford, Hatfield, Hertford and Harlow, isn't it?!).

We did some exploring round Chelmsford, including a walk along the Chelmer Canal to Paper Mill Lock 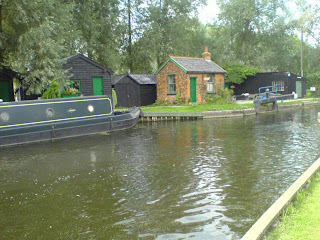 where we drank tea and watched the barges going past. On the way back I saw these footpath route signs, which I thought pretty much summed up life in general... 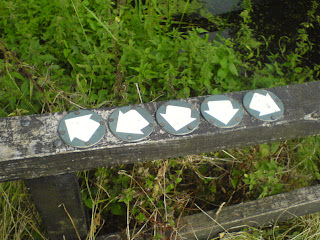 Not sure when I'll get to blog again. I'm off to Greenbelt on Friday (yay, more driving practice on Big Scary Motorways!!!), then back to Slough via Bristol. I've got the week off work after Greenbelt, and I'll be going up to Lincoln, then into Derbyshire for a few days and across to Stockport to visit my great-aunts. So no doubt my next post will be stuffed full of pictures.
Posted by Daisy at 8:29 pm 10 comments:

Oops, it appears to be nearly two months since I last blogged! Life got a little out of control, my broadband access disappeared, or rather, never arrived (loooooooooooonnnng story) and now I'm trying to work out where on earth the last 7-8 weeks went!

I did move house. But I was diagnosed with depression a week before that, and I highly recommend NOT trying to move house whilst starting anti-depressants, or, in fact, being depressed. I spent a lot of time sitting on the floor saying "I don't know!" whenever the removal men asked me if a box was going to Slough or Lincoln.

Two LARGE lorries arrived (one for Lincoln, where 2/3rds of my stuff now is, the other for Slough, where everything else is), which seemed a bit excessive. Furniture lined the pavement in Newark: 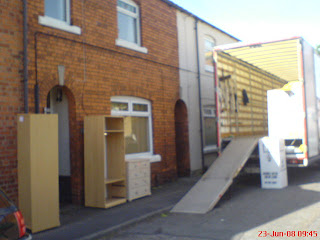 The next day, in Slough, the lorry dwarfed my flat from the outside... 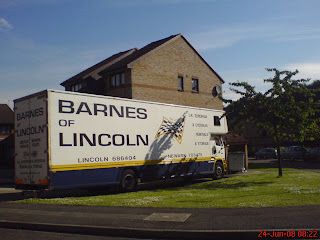 There were boxes everywhere (all my yarn is now in Slough, which isn't what I'd intended, but I was in no state to sort through it! Fortunately I got the books sorted into Lincoln/Slough a month before the move otherwise there wouldn't be room for me in the flat!). 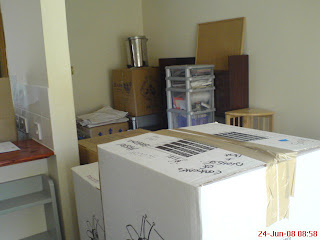 Monkey keeled over with exhaustion. 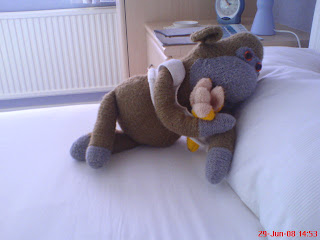 I had three weeks off sick from work, during which I sat around in Lincoln and didn't do much, other than knit squares for the Oxfam Maternal Mortality rate blanket campaign: 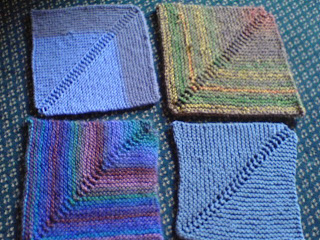 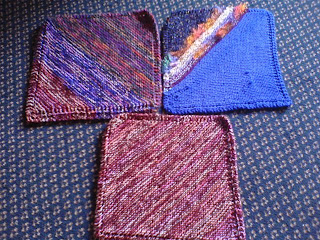 Finished off the Freedom Spirit tanktop that had been OTN for months. 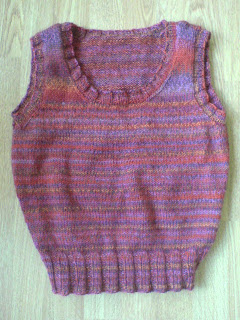 And knitted another pair of bootees for my old boss' new baby. 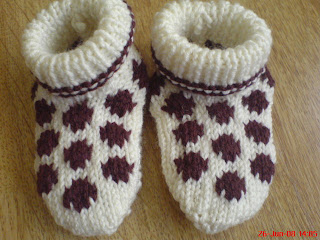 Then, four weeks ago, I got back behind the wheel of my car, headed for Slough and went back to work. It hasn't been tooooo bad, but I've been concentrating on going to work, sleeping and eating for most of the time. The first week I lived on ready meals, but now I'm cooking virtually every night and feeling a lot better. Fortunately it's a fairly quiet time of year at work so it's not been too mad and my colleagues have been really supportive.

The flat is looking great, and I'm pleased I did move when I did, as it's made a massive difference being able to live on my own again, rather than with various strange housemates, which is why I became depressed. I've just ordered a veg box, as I used to love getting them when I lived in Newark. My first box, which is from Riverford's Upper Norton Farm, should be coming on Wednesday. My church in Windsor has been fantastic. My flat is about six miles from there, which is a pain, as I would prefer to live closer to the community of people who attend my church, but the rents are SO high in Windsor there's no way I can afford to live there (it's bad enough in Slough!!).

Soon I'm planning to start cycling to work - it's about six miles in the car, but the cycle route is more direct, only about three miles, which should make a massive difference both to my fitness levels and petrol bill! I've been exploring some of the local area - Burnham Beeches is impressive and I've been doing a 30 minute walk every lunchtime, so things are looking up. More photos to follow, as, hopefully, I'll be blogging more often now too. I had six weeks without much of an internet connection at all, so I'm again hopelessly behind with blog reading so will be doing some catching up soon...
Posted by Daisy at 6:10 pm 11 comments: