Yes, both Monkey and I succumbed to swine flu last week. Fortunately the Other Half hasn't caught it (yet) as he was kept very busy doing the shopping, cleaning the house, supplying bananas and providing TLC.

Mine hasn't been too bad. I'd been feeling a bit funny for a couple of days, just tired really and had been having early nights, then fainted in the library last week! Ironically I'd actually been feeling better that morning and had been climbing wobbly 18th century ladders and all sorts of similar things. Then I passed out at the end of the morning, just like some 18th century heroine! Once I'd picked myself up off the ancient carpet I got hold of the OH who came charging straight over to the library, announced that I felt hot and suggested that he took me home & I try and get a doctor's appointment. Which he did; he then had to hang around all afternoon whilst I slept, as I didn't manage to get a doctor's appointment until after 5pm! Of course, this was happening at exactly the same time as the Pandemic Flu Information thingy was going live and then immediately crashing, which meant we couldn't use that to check my symptoms.

Anyway, I've been doing lots of sleeping. It hasn't been as bad as "normal" flu, and it's been a massive help having the OH around as it would have been grim being like this on my own in a flat in Slough! Fortunately also the doc wouldn't prescribe Tamiflu as I'd already taken a course of it six weeks ago when there was an outbreak at work and the Health Protection Agency was still attempting to contain it. As I suspected six weeks ago, taking Tamiflu is MUCH worse than having swine flu.

Monkey, on the other hand, has really suffered. Presumably man-swine-flu is worse than swine flu, and therefore monkey-man-swine flu has got to be Really Serious? He has spent the time lolling around, complaining he feels cold and stealing my dressing gown to wrap round himself. Oh, and I found him throwing up down the side of the sofa, but I think the OH may have had something to do with that. 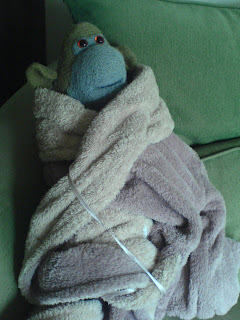 I'm definitely on the mend now. I finished off another WIP, which I'll post about soon. Then I was going to get started on my next project, Narvik, from Rowan 42 (after buying the yarn at Get Knitted when I did the crochet workshop last year), realised that 7mm needles are the one size I don't possess, trotted off to find some on the Celticove website, discovered the clearance section and ended up buying 15 balls of Mirasol Sulka in sage as well. So much for the yarn diet, but then I think I need cheering up after the swine flu, don't I? And it's Fair Trade yarn, so that's even better, surely?
Posted by Daisy at 8:19 pm 10 comments:

I'm a bit out of the loop with podcasts. I didn't have time to listen to any for ages, but now I've got about 30 minutes of commuting time every day I've resurrected my Ipod.

Can anyone recommend any more knitting ones? Or any others that I might like? I've been catching up with the Greenbelt talks that I downloaded last year and then never got round to listening to.

Also, is anyone going to the Iknit weekender in September? I'm hoping to go on Saturday 12th - don't want to take any more time off work as I'm getting through annual leave at a scary rate with moving house!
Posted by Daisy at 4:43 pm 2 comments:

The house move has been accomplished.
Between us we had three lorries. The Other Half had 63 boxes of stuff, I didn't have quite as many, but still quite a few. We had boxes stacked everywhere. We had to have a one way system to get round the living room. 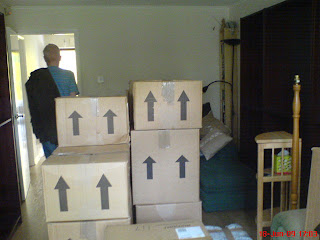 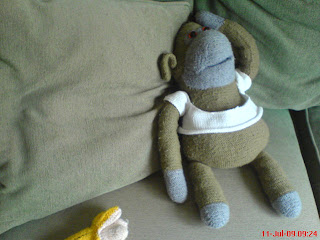 (note to Other Half: did you actually see Monkey unpacking anything? He looks totally knackered in the pic but all I ever saw was him lounging around?)

Once the boxes had disappeared we were free to enjoy the comforts of the new house:

The garden. I washed all my handknitted scarves and hung them out to dry. It is VERY nice having a garden again. Yes, that is a train in the background. 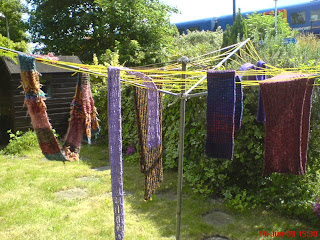 The garage. Which is VERY narrow, and our road is, ahem, popular for car parking, so it can be very tight getting into the garage. So Oxo got scraped. Oops. Sorry Oxo. 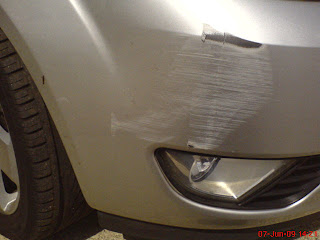 Walks along the banks of the Thames. 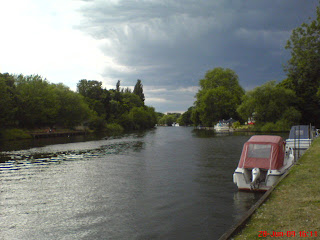 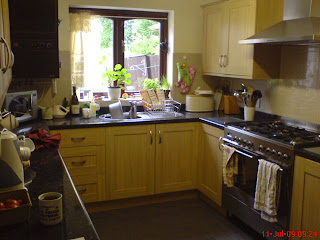 The commute to work. Which is very cool indeed. It's a short trot to the station, then 13 minutes on the train, then a 10 minute trot to work. In fact, 13 minutes is proving a little too short a commute to get much knitting done. Plus, commuting OUT of London means that there are loads of seats. The trains have air conditioning. Apart from one day, the trains have all been on time or early so far. This is SO much better than driving through Slough to work every day... 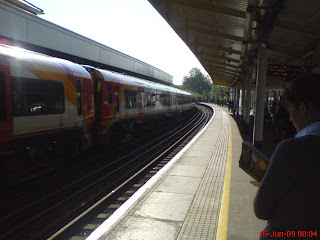 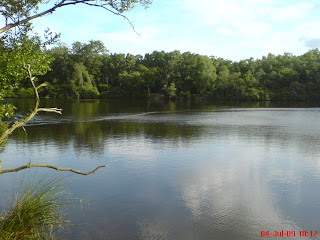 And I've even got some knitting done. The Rib Fantastic socks are nearing completion! I'm trying to get a few projects finished off before I start anything new. 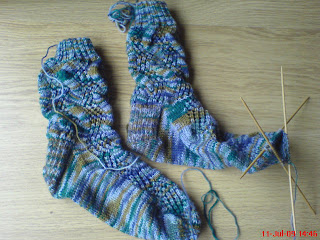