So, at the moment I drive round work at lunchtime collecting empty boxes, stuff my car full of them, then at weekends drive up to Newark and stuff things into the boxes. 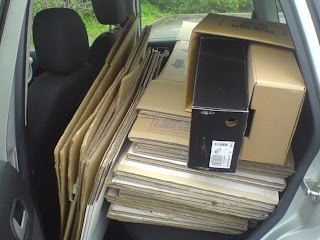 Fortunately Monkey quite likes sitting in boxes. Otherwise we'd have a bit of a problem. He gets a bit cross if he can't see where he's going though. 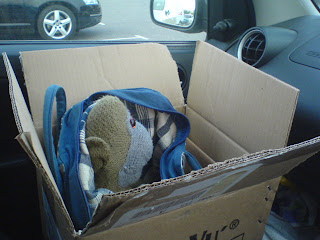 I can reveal the little hat I've been making as little baby person arrived safely last week! This is the Polka Dot Bootees and Hat set by Zoe Mellor. There would be matching bootees with it, except I was wrapping them up and realised I'd made the bootees in two different sizes (well, you try living with Daisy the Dog From Hell and making bootees in the same size) so one of those needs re-doing. 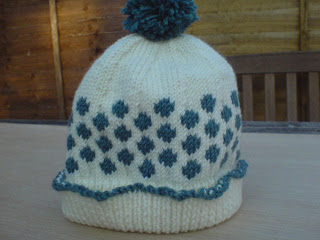 And I finally finished the Garter Rib socks, made as a thank you for Fiona who'd given me her old Ipod. I think an ipod in exchange for a pair of handknitted socks is a fair exchange? I got most of them done and then got her to try them on whilst I was in London to make sure they fitted properly. 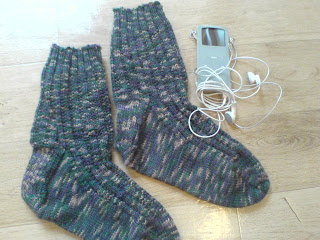 I've been spending most of my weekends in London and/or Lincoln and/or Newark, as I'm really not impressed with life in Windsor. There is something wonderfully ironic about walking round Tower Hamlets (which, you have to admit, isn't an area with the best of reputations) with a friend feeling happy and then feeling all doomy and gloomy about returning to Windsor (which is supposed to be quite nice, in a posh n' refined sort of way.) Supposedly also Yarnstorm lives somewhere near Windsor, and her life always looks rather nice, but I suspect her husband earns a bit more than Monkey does so slightly different life style there (well, she's not living in lodgings with Daisy the Dog From Hell, is she?!).

Last weekend I went to stay with a friend in Tower Hamlets and we walked over to Canary Wharf to the cinema. 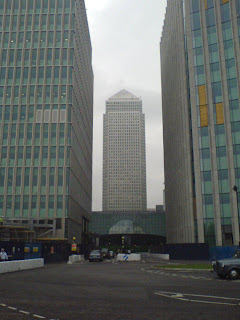 We saw "In Bruges" which I don't think I'd have seen off my own bat. I don't usually watch "18" films, being a bit of a scaredy cat, but we couldn't work out from the description why it was an 18, and it sounded rather good, so off we went. I can see now why it is an "18" - the graphic violence, gratuitous blood, cocaine-snorting, sex and liberal use of the F word (126 times in a 107 minute film!) probably had something to do with it, but it was really really good! Absolutely hilariously funny (I'm not sure what the people of Bruges would think of it, as it was a little derogatory...) and one of those films that makes you want to go and have a good long think. The friend I saw it with, who's a priest, could think of various sermon ideas from it, although we weren't sure if we'd get away with doing a showing of it at church...

I'll be moving house over the next 10 days or so - bit of a long drawn out process, but stuff is coming from two different places and going to two other ones and some of that is crossing over. And I just know some of it is going to end up in the wrong place. And I'm not convinced the flat will be ready in time to move into (the landlord thought he could install a new shower, carpet and kitchen in four days. I have my doubts) so the next couple of weeks should be most interesting.
Posted by Daisy at 8:52 pm 10 comments: