Knitting tiny sizes certainly goes quickly! This is the front of the Milly tank top in size 3-6 months which only took a few days to do. I have realised that, whilst I like doing the regular type of Fair Isle with repeating patterns, I'm much less keen on the ones where you have to do lots of counting and it isn't regular, or you have to carry long floats behind the work to twist in every so often. It would probably also have helped if I hadn't also been watching 1864, which is in Danish with subtitles at the same time! Still, it was fun knitting on this size garment. I think for an adult size garment I'd want to stick to regular Fair Isle, as I learnt the holding-the-yarn-in-both-hands technique a few years ago. 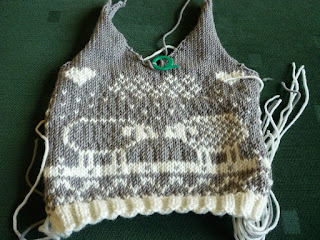 This is my mitred square baby blanket made out of (machine washable) sock yarn oddments. I've finished all the mitred squares now and am planning to crochet a border, just had to wait for a 2.5mm crochet hook to be delivered as they don't have the Clover soft-touch ones at my local Hobbycraft. 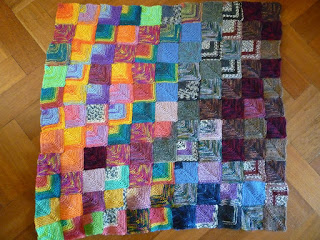 And I finally got around to cutting out the pieces for a dress for the impending niece. This is the fabric I bought on holiday back in early June so it's been handing around for a while! This is the wrong side, the right side is much brighter. The local haberdashery is closing down at the end of this month, so I am going to have to be organised about going somewhere to buy buttons for the dress, as I'll have to get the car out and go further afield for them now. 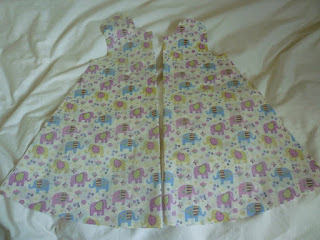 #6 Pamela Cox and Annabel Hobley Shopgirls: true stories of friendship, hardship and triumph from behind the counter
I got this one from the library after meeting one of the authors when I was at work. It narrates the history of women working in shops from the mid-nineteenth century until the present day, and is full of little anecdotes and detail gleaned from the archives. I learnt a huge amount about social history, for instance, I'd had no idea that Sunday trading laws were a relatively new thing, and once upon a time shops used to be open very long hours to enable people who worked in factories etc to have a chance to shop. I think I'd been vaguely aware that shopgirls used to "live in", as a way of guarding their morals, and getting more work out of them for less money. It was also interesting to discover that the whole "demise of the high street" and move to big stores isn't a new thing, and the whole area of shopping has been in a state of flux ever since the nineteenth century!

#7 Deborah Cohen Family secrets: the things we tried to hide
This was another one I saw on the book suggestions pile near the self-issue machines in the library and picked it up as it looked interesting. It draws on archive material from the last 200 years to look at what families found shameful and how they tried to cover it up. So it looks at social attitudes, and how the law changed. It was really interesting seeing how things changed over time - Victorians were apparently happy to keep their disabled children in their midst, as they saw them as just one of those things and that they had a duty to look after them. But once the basic idea of genetics filtered through, having a disabled child indicated that something was wrong with your family so people (especially the middle and upper classes) were more inclined to hide them away in an institution. Obviously other attitudes changed over time too, including people having babies outside marriage, and whether adoption was OK or not (the changing ideas over whether or not children should know they are adopted were interesting too), and attitudes towards homosexuality, which was actually considered OK (even if illegal) most of the time, as long as people weren't too flamboyant about it. The book moves on to look at notions of privacy, and how they compare to now - once upon a time people tried to keep secrets within their family, whereas now people are more likely to share a lot of information via social media, but also be to be fiercely protective about what information search engines such as Google store.

#8 Julie Summers When the children came home: stories of wartime evacuees
In similar vein to the book above, this is another popular history type book, based on the accounts of wartime evacuees. It covers a lot of ground, looking at evacuation from the point of view of children and parents (plus people that went with the children, such as teachers), those that were evacuated to other countries, or evacuated from other parts of the world, and those for whom evacuation changed their lives in a positive way, and those who had an appalling time. It was a real eye-opener, as, of course, I knew children had been evacuated, but I had little idea of the logistics involved, or the different types of evacuation. From a 21st century perspective it sounds such a risky thing to do, to send children away to unvetted strangers, not knowing when you would see them again.


#9 Alan Titchmarsh Lawns, paths and patios
And now for something completely different! We're planning a garage extension and new patio/driveway so I thought I'd do some background research so got this from the library. It's fairly basic, but fills you in on all the basics you need to think about. It includes a lot of diagrams for how to do the work yourself, which we aren't intending to do, but it did help me to get an idea of what is involved in a project of this kind.

#10 Mary Gibson Custard tarts and broken hearts
Fiction set before and during the First World war, featuring the women who work in a custard factory in Bermondsey. I enjoyed the setting the scene and the attention to period detail. It's all a bit  predictable, but an enjoyable read nonetheless.
Posted by Daisy at 5:18 pm No comments:

I've been doing a lot of baby knitting recently. So far this has been for friends and relatives (I have a niece due in September), but, as is probably obvious in the photo below, I'm expecting a baby too, so it looks like there will be a lot more baby knitting in my future. 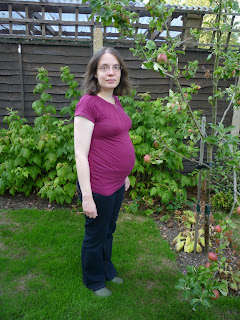 I haven't really started knitting for my baby yet, as it's not due until December, but this is what I've been making for the impending niece:

Ella Funt cardigan by Pamela Wynn. This is a really cute pattern, which I loved as soon as I saw it. It's a bit of a pain to get hold of, as due to the whole VAT mess thing, it isn't available as a download in the UK, and you actually have to go to a shop that supports Ravelry pattern selling and buy it from them, who will then put it into your Ravelry library. Fortunately it turned out that Iknit at Waterloo could do this, and I visited there whilst on the Fashion on the Ration outing so got my hands on it then, plus some balls of Debbie Bliss Baby cashmerino with which to make it. It's a fun little pattern to knit, and I love the elephants! The patterning uses some leftover bits and bobs of thinnish DK that I had lying around. 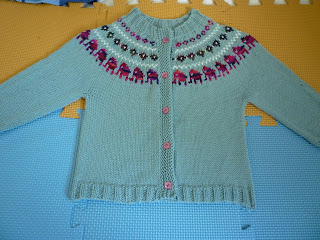 My brother and SIL really aren't ones for the whole pink/blue thing (well, neither am I for that matter!), but I thought they really should get something that was pink and sparkly, tee hee, so I found this pattern and yarn whilst on holiday. You can't really see the sparkle on it, but I promise it is... I'd forgotten what a pain it is knitting all the bits separately and sewing them all together at the end. So much easier to knit it all in one from the top down or bottom up. Don't think I'll be using this pattern again! 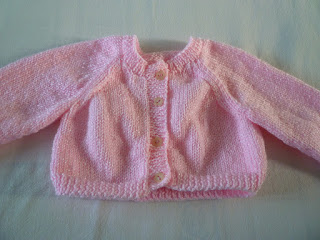 I haven't yet made up the little dress I'm going to make for the niece too, but that should get finished in the next week or so.

And, what am I planning to knit for my baby? Well, I've got a baby blanket half-finished so far, a really cute sheep tank top which I've already bought the yarn for and a puerperium to make too!

And my totals for July are looking pretty good, as I didn't buy any yarn that month, but I used up 728.5 metres. So, the running total for the year so far is 1355.9 metres more yarn used up than stashed!

Garden at the beginning of the month August 2015

The 1st August is a Saturday, and fine, so I could get the photos taken on the day for once! The weather has gone a bit cooler again (after torrential rain last week), which means the grass has greened up again. Everything is still a bit on the brown side though, and I don't think things are growing as well as they did last year. Think it must have been the early heatwave. 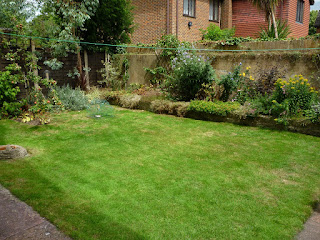 Echinacea. Although there's several flowers, these haven't reached the height they normally do. 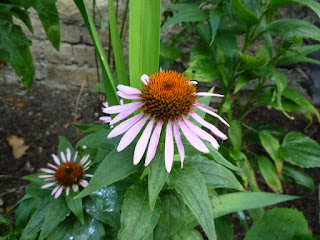 Echinops, with bee. I grew these from seed a couple of years ago, and, although they've been really good at attracting insects, they have grown enormous and are crowding out some other plants. Plus the bottom two thirds of them are quite ugly, so I think they're going to go once they've finished flowering. 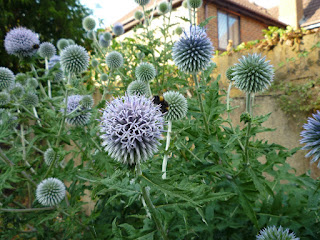 The lavender is flowering well, and has also been covered in insects. 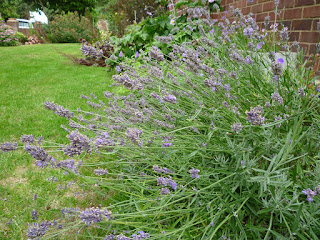 The first gladioli to flower. I staggered the planting of these so we should have a couple in flower the whole of the rest of the summer. 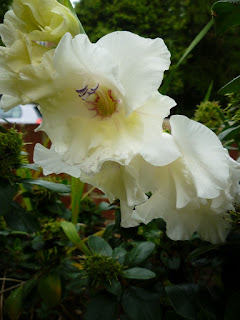 Rudbeckia bought last year and flowering for the first time. 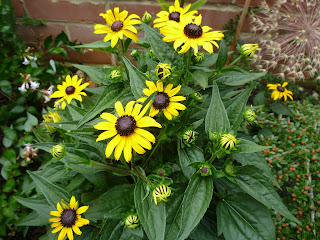 Japanese anenome bought four years ago. This is doing really well and has loads of flowers on it, which keep on coming into the autumn as long as I remember to dead head. 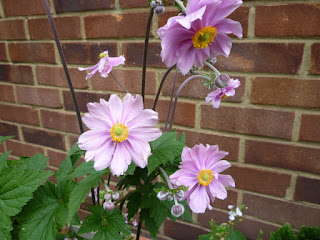