There isn't a huge amount of progress to report, plus I have forgotten to take a pictures of my Samwise Gamgee socks, so it looks like I've done even less than I really have!

The only finished project this month is another Baby vertebrae, as a present for a friend's baby. This one is knitted with another ball of Patons Fab DK, this time in the "Halloween" colourway. Does it look anything like Halloween to you?! I like this pattern as it's easy to use up an entire ball knitting it - you do the body and the edging, then weigh the yarn that's left over and divide it in two to do the sleeves. 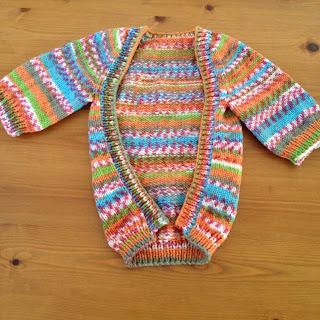 I've done quite a bit on the Ella Funt cardigan too. This one is knit the body and sleeves separately, then join the whole lot together for the yoke. That's the stage I'm at now. I actually started the fair isle using some leftover bits of yarn, but there wasn't enough for all the elephant rows so it looked a bit strange. I've frogged that back now and going to do the elephants again with a different colour yarn this time! 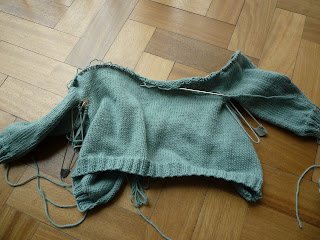 I'd booked a ticket for the Friday of Iknit Fandango a while ago, and on the day I had a cold and really didn't feel like dragging myself into London. I probably wouldn't have gone if I hadn't already got the ticket and didn't want to waste the money spent on it. And, I'm glad I did go. I only stayed for about 90 minutes, as I didn't really feel up to much more than that, but I really enjoyed it when I was there.

I liked the venue, at the Royal Horticultural Society's Lindley Hall.  It was nice and light, which made it easy to check yarn colours. It's not the biggest hall in the world, but this wasn't a huge festival, in fact, it was just the right size to see everything without getting overwhelmed with colour and people and stuff. 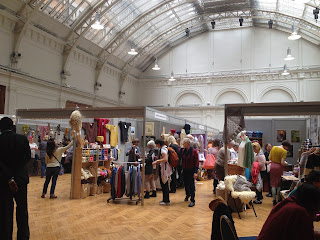 There were several rows of stalls to make your way round.  I did one complete tour of the whole thing, looking for yarn companies I know I particularly like and particular things I was looking for. 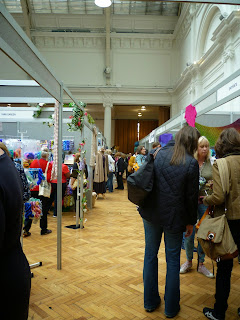 These animals are from Edward's Menagerie on the Toft Alpaca stand. 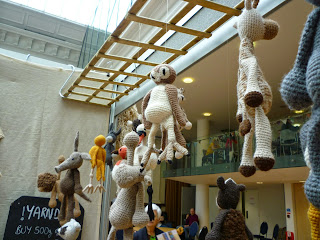 And another picture of their stand. 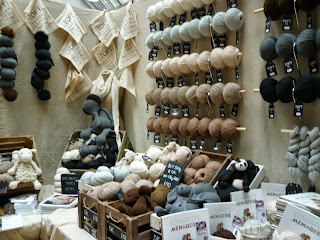 These are the ladies on the Knitting and Crochet Guild stand, who were winding skeins into balls for people. 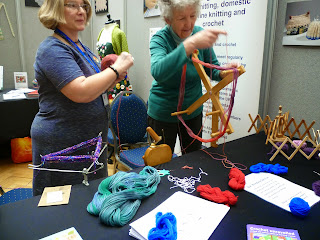 There were refreshments on a sort of gallery level, provided by the Finchley Women's Institute too.

And what did I buy? Well, I was very taken with the yarn on display on the Triskelion, Easyknits (especially their Deeply Wicked line in amazing colours) and Sparkleduck stands.  But I was aware of the yarn diet, and in the end I was most tempted by the Wollmeise stand. This is a 300g ball (approx 1500m) of Wollmeise Lace-Garn, in the "Spicemarket" colourway. There is enough there to knit me a cardigan. Hmm, a cardigan in laceweight, that's going to take a while?! It also came with a little bottle of wool wash. 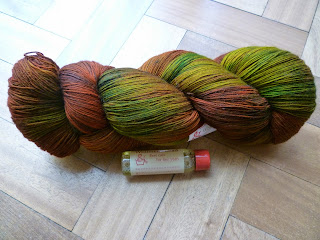 And from Toft Alpaca, I bought a copy of Kate Davies' Yokes book, which I've wanted for a while. Lots of lovely patterns, and lovely detail about the history of knitting. And it came in a cute drawstring project bag. I was also on the look out for some Knit Pro Symphonie 3.5mm needle tips, which I found on the Knitting4fun stand, so mission accomplished! 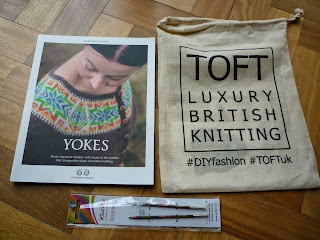 It was also good to see a few people that I knew from blogging and Ravelry, although I suspect a lot more were going on the Saturday.
Posted by Daisy at 6:24 pm 1 comment:

Fashion on the Ration

Last weekend I went off into London for the day, to meet up with some fellow knitting Archers Listeners for some knitting, lunch and a trip to the Fashion on the Ration exhibition at the Imperial War Museum. I have a rather low opinion of the Imperial War Museum at the moment, due to their plans to close their research library (very bad idea), and then to keep it open but with limited hours and charging for use (bad idea) but the exhibition sounded interesting, and I wanted to meet up with the others again.

I wasn't very good at taking photographs during the day, but there are a lot more, including of the exhibition itself, on Whitehart's blog. We initially met up at Iknit, near Waterloo, for some browsing, shopping and knitting. 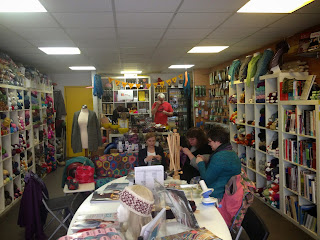 Before moving onto the Four Corners Cafe for some lunch, then heading to the exhibition. I thought the exhibition was a good size. It took about 45 minutes to go round, so there was enough to see, without being overwhelming. There was a nice mixture of dresses, men's clothing and uniforms on display, supported by archival sources (including letters, posters and ephemera), film and sound clips. I really enjoyed it, I just wish I'd thought to take some photos inside! I really liked the Utility dresses, and thought it was very sensible way of ensuring good quality clothing that would last, but without using vast amounts of scarce materials.

Of course, a trip to a yarn shop meant that I did some yarn shopping. I'd spotted this cute elephant cardigan on Ravelry, but it was unavailable to buy online due to the VAT mess, and was a yarn shop only purchase. Fortunately Iknit does those, so I could buy it there. I'm intending to make this for the niece that's on the way later this year, so I purchased some Baby Cashmerino that will go with some that's already in my stash so that I could get started on it. 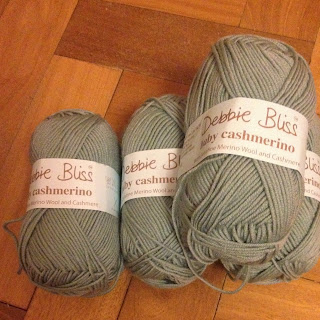 Last week I also acquired another skein of Madeline Tosh Sock, in a colourway that will go with the existing Sugar Plum colourway I have in my stash. This one came via ebay, where I'd got a search set up looking for this in particular. I'm intending to use these for a Byatt shawl.
The new colourway is called "Midnight Rendezvous" 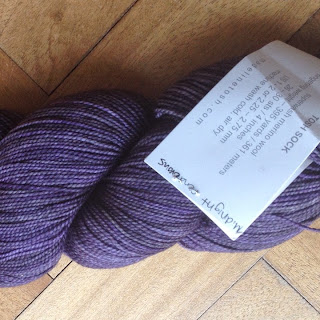 And as you can see, it should look nice with the other skein! 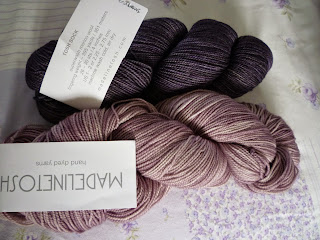 I'll do an update on stash enhancement amounts at the end of the month! Oh dear, Iknit Fandango this coming week... But at least my purchases so far have been for definite projects which will mostly be started asap.
Posted by Daisy at 6:36 pm No comments:

Garden at the beginning of May 2015

And what a difference a month makes! The garden has grown a huge amount during April, must have been the unseasonally warm weather, plus a few showers. The raised bed is filling up with not much soil visible now (great from a weeding perspective!). 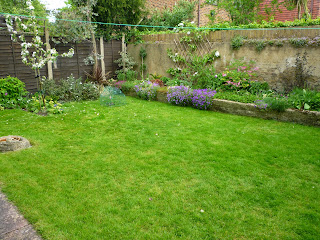 The Aubrieta along the edge is flowering well. These were a multi-pack of different coloured varieties, which look really pretty next to each other. There was a variegated one, but I don't think it was as robust as the others, as it seems to have vanished! 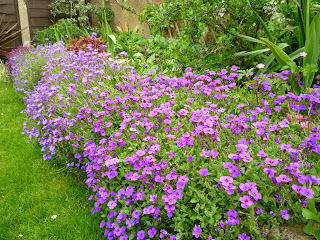 The next few photos were taken towards the end of April, as I didn't want to miss out on having the tulips included. These have come up again after I planted a multi-pack of different purple varieties about 18 months ago. 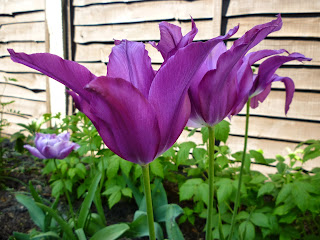 The strawberries are flowering, so hopefully we'll have some fruit soon. For the OH rather than me, as I can't eat them! 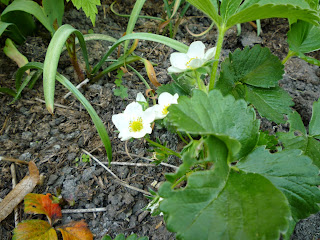 The espalier apple was slightly later than the standard apple to blossom, which is what we expected. It's pretty covered now though! I can't remember this much blossom in previous years, so hopefully this will a be a year of lots of apples? 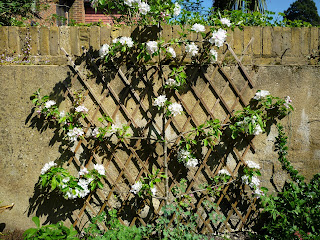 And the two Dicentras have grown huge this year, with loads of flowers on them! 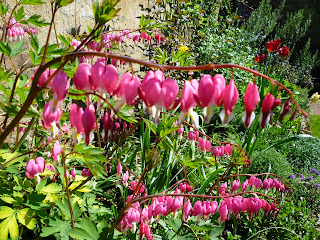 How is your garden looking?
Posted by Daisy at 6:10 pm 1 comment: