I got a few projects finished just before Christmas. One was Fantastic Purple Cardigan (the Velvet Morning pattern from Knitty), which I made with Araucania Toconao. It's turned out to be a lovely snuggly cardigan, very warm as the yarn is aran weight. 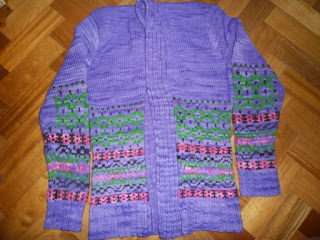 It's not quite as swingy as the Knitty pictures, as my gauge between the plain and fair isle sections turned out to be very very different, so it pulls in quite a bit round the middle. But I still like it, and will wear it, so that's the main thing. I do need to do more practising of fair isle though, as the sleeves (which I knitted last) are much better than the body! The balls are 100g each, which means I have nearly 350g of yarn of the purple (and a bit of the other colours too) to make something else with.

According to Ravelry it's taken about 10 months to knit this, which isn't really true. It was quite a fast knit, as the fair isle keeps you interested, and the aran weight means it goes fast. However, I wasn't keen on the idea of sewing the neck edging all the way round the front, as sewing up really isn't my favourite thing, so I did loads of procrastination. When I eventually did get round to it, I mattress stitched the collar on, and it didn't actually take that long after all... 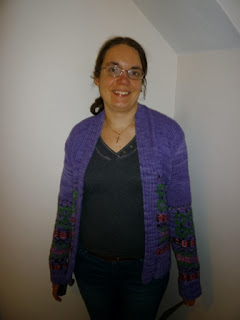 Another finished project is a ribbed scarf for my BIL for Christmas. This used three balls of Patons Colour Works Aran, which has some fairly subtle colour changes in it. It's nice and soft (and machine washable) but a bit on the splitty side for knitting with. 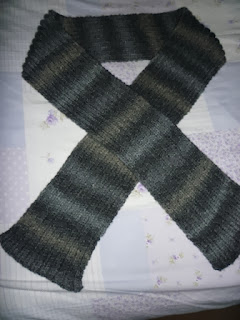 I made this beanie hat in about 10 days just before Christmas - finished on Christmas Eve just in time to wear it to Midnight Mass! Again, this didn't really take 10 days to knit, most of it was done using magic loop, but I realised I'd find DPNs more useful when the circumference got smaller, and Hobbycraft didn't have the right size in stock so I ordered some from GetKnitted, who were commendably fast (I did wonder whether they'd get through the post before Christmas!).

The pattern is the Thrifter Beanie by Woolly Wormhead, knitted in Manos del Uruguay wool clasica, which is another lovely squooshy yarn. 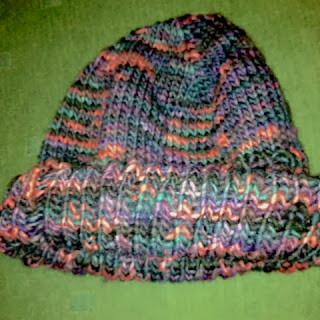 And this chap is the Man Who Built His House on the Rock, which I made for a friend who runs a charity that does RE teaching with primary school and younger age children. The idea is to have two larger figures that can be used to tell the story, and then make some smaller pairs of figures to give to groups of children so they can tell it for themselves. The figures don't have to have any particular look, and don't have to have a "Biblical" look, they just have to be different to the other one in the pair.

This one is based on the basic pattern from the Sirdar Nativity collection by Alan Dart, and I used some leftover bits and pieces of DK. I wasn't going to make the cloak thing for him, but you can see where the head is attached to the body without the cloak so I added it. Cardboard circles in the feet ensure that he can stand up! The hair is some leftover fun fur yarn someone at knitting group was getting rid of. 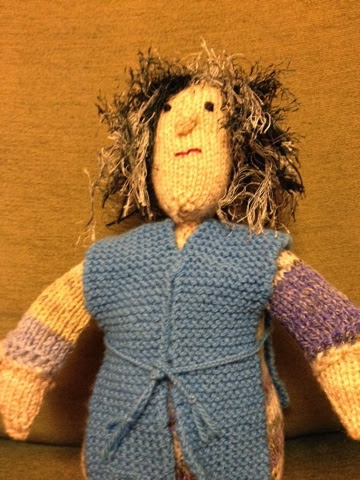 I found it quite hard going, as there are LOADS of little pieces to sew together (not my favourite thing!), so I thought I might give Bobble Man a try for the next one! I love the Ravelry pattern browser/advanced search, as it made it really easy to narrow down what I was looking for!

I also found a Downton Abbey season 4 mystery knitalong whilst I was looking for Bobble Man. Shame I've already seen it...

According to my Ravelry projects page, that makes 12 projects completed this year, seven of which used stash yarn, which is pretty good going (I haven't yet done a calculation about how much my stash grew this year!).
Posted by Daisy at 5:46 pm No comments:

This year, with working part-time and the bank holidays, I've ended up with a 3.5 week Christmas holiday whilst only using up 4 days of annual leave. This is the longest break I've had since I was an undergraduate, and I've had a great time getting things sorted out for Christmas, oh and getting a new shed, but more about that in a later post.

Back in November I made the Christmas cake. This is the dried fruit and brandy soaking overnight. 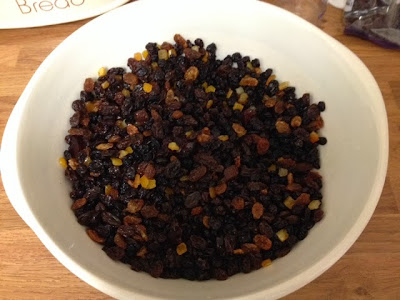 And the cake when it came out of the oven. 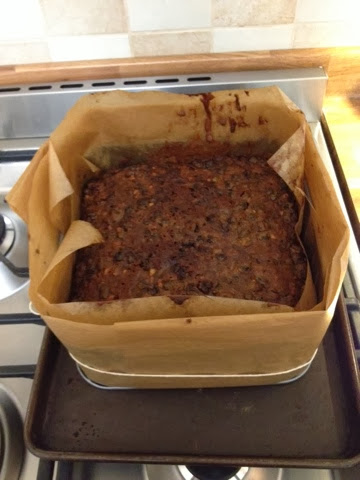 Then I poured brandy over it every week until last week, when I added the marzipan to it. Which I forgot to photograph.
Then today I iced it, using the cop-out ready-made fondant icing instead of royal icing. 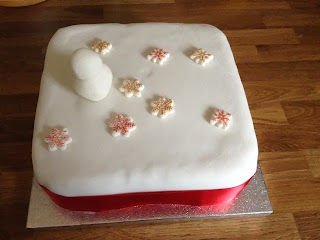 This is batch of mince pies number three. 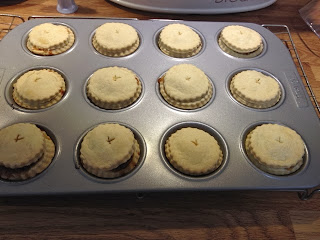 I also made stollen for the first time ever, and it was surprisingly easy, just time consuming because of having to leave it to rise for a while. I made one batch using the Delia recipe, but that is actually much more complicated than the Paul Hollywood recipe I used for the second batch, which also has more dried fruit it so it a lot tastier too.

As you do, a week before Christmas, I finally got the curtains altered that I've been meaning to do for nearly four years now... 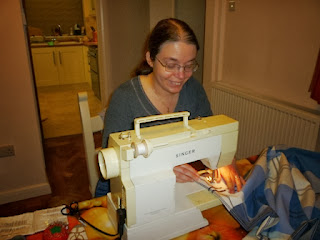 I had these up in my old house, and the windows here are smaller, so the curtains were covering the top of the radiators - not ideal in the winter, so I've shortened them (there's a second pair too) to a more sensible length. This is one of the spare bedrooms ready for Christmas guests! 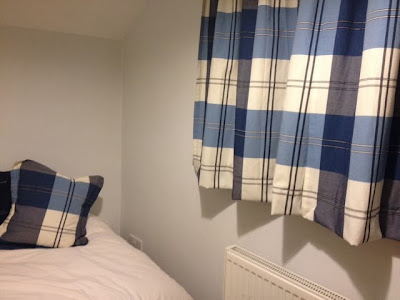 Think that's all for now. Another post to follow shortly with my finished projects on!
I hope you all have a fantastic Christmas!

A lot of the knitting I've been working on at the moment is for presents, so I haven't been able to post pics. But it was my god-daughter's second birthday yesterday, and I'd knitted her an elephant (this is the Elijah pattern by Ysolda). Apparently she's very pleased with it and has called it "Elephant". An elephant takes exactly one ball of Sirdar Country Style DK, using 3mm needles to make the fabric firm enough to stop the stuffing appearing.

I got an iPhone for my birthday, and have been playing around with pictures and knitting apps (I've never owned a smartphone before), which is why some of these pictures may look stranger than usual. I'm loving the Yarma app, which lets you take a photo of your knitting or stash and upload it straight to Ravelry. 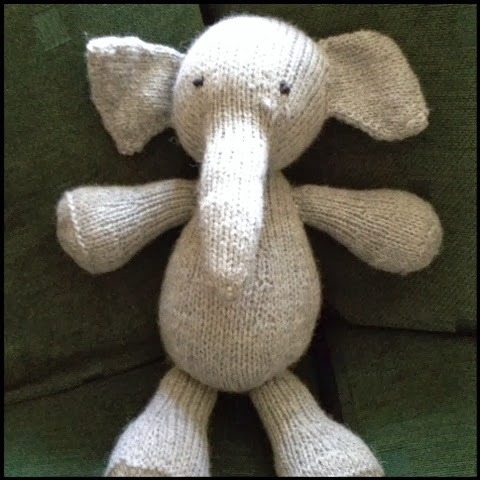 And I've been knitting a cabled hoodie for my nephew's birthday in December, but had to get it finished last week as they were coming to stay on Friday night, en route to Heathrow.

This is it a week ago, almost finished, with just the hood to do. That's the point when I ran out of yarn (John Lewis Heritage Aran, which comes in huge 400g balls), which wasn't available online. In the end I had to ring John Lewis on Oxford St (where I bought the first ball) and they tracked down another ball at the Brent Cross branch, which someone then posted to me. Can't beat the John Lewis customer service... 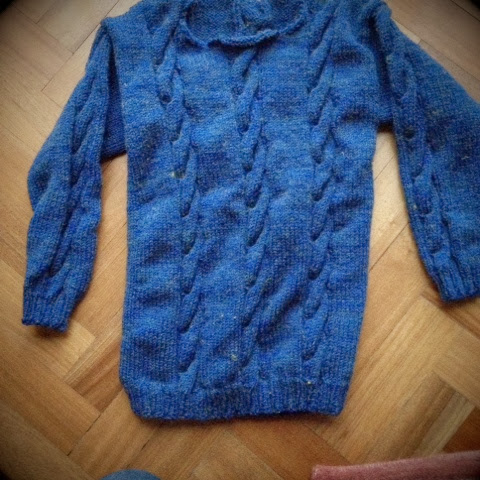 Some frantic knitting this week got the hood finished and sewn on, then I blocked it overnight on Thurs/Fri, and wrapped up on Friday, about two hours before he arrived! The colour below isn't very accurate, it's more of a royal blue as in the picture above, but by the time I finished it there was no daylight so this was the best I could do.

Hopefully he'll like it. This is the 9-10 years size, which is almost big enough for me to wear! 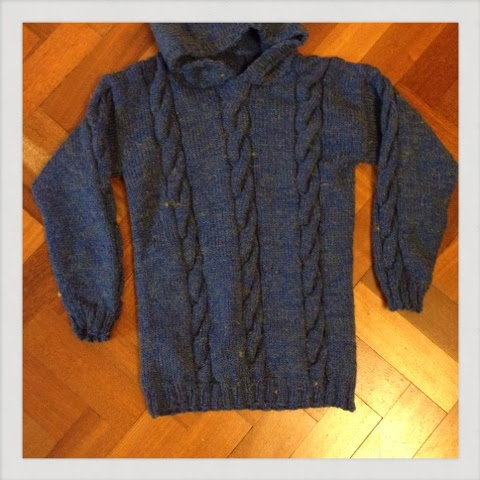 After leaving it blocking I went off to one of our "extra" knitting group meetings - in the daytime several of us who work part-time/are SAHMs sometimes meet up for an extra knitting group - and had to quickly grab my sock yarn blanket as I hadn't got anything else to knit at that point! A strange feeling.

This is coming along well, considering I only knit it when I haven't got anything else on the go. Despite it being a leftover sock yarn blanket, I did buy a couple of balls of My First Regia to get the bright orange and yellow colours I needed at one end of it. 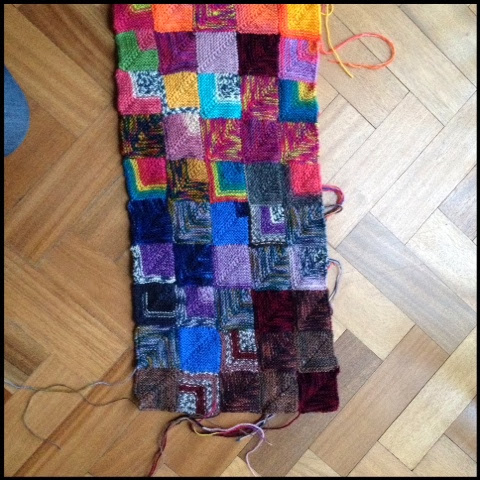 And yesterday I cast on a scarf to give to my BIL for Christmas. This is just a simple k2p2 ribbing, using Patons Colour Works Aran, which is lovely and soft to knit with, but a bit on the splitty side. Still, I like the way the colours work out in it. Despite being aran the recommended needle size is 6.5mm, so it's growing fairly quickly. 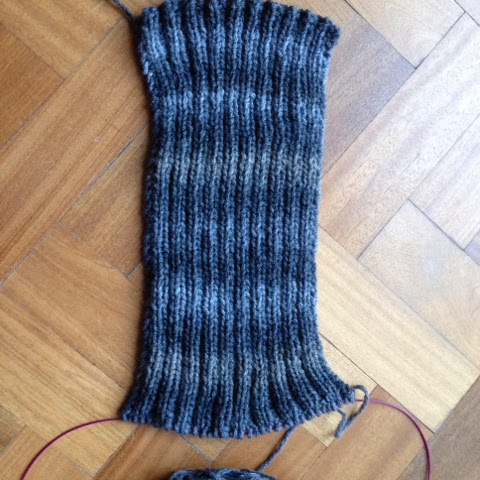