This year I just happened to be going to visit Mostly knitting the same weekend as Yarndale, so, of course, I just had to accompany her there. It was my first visit to Yarndale and I was really impressed. Apparently last year there had been problems with parking and not enough loos. This year however a park and ride was laid on from the Skipton Building Society HQ car parks, using minibuses, and which raised money for a local charity.

Yarndale itself is held at Skipton Auction Mart, a huge set of buildings, more usually the location for livestock sales. 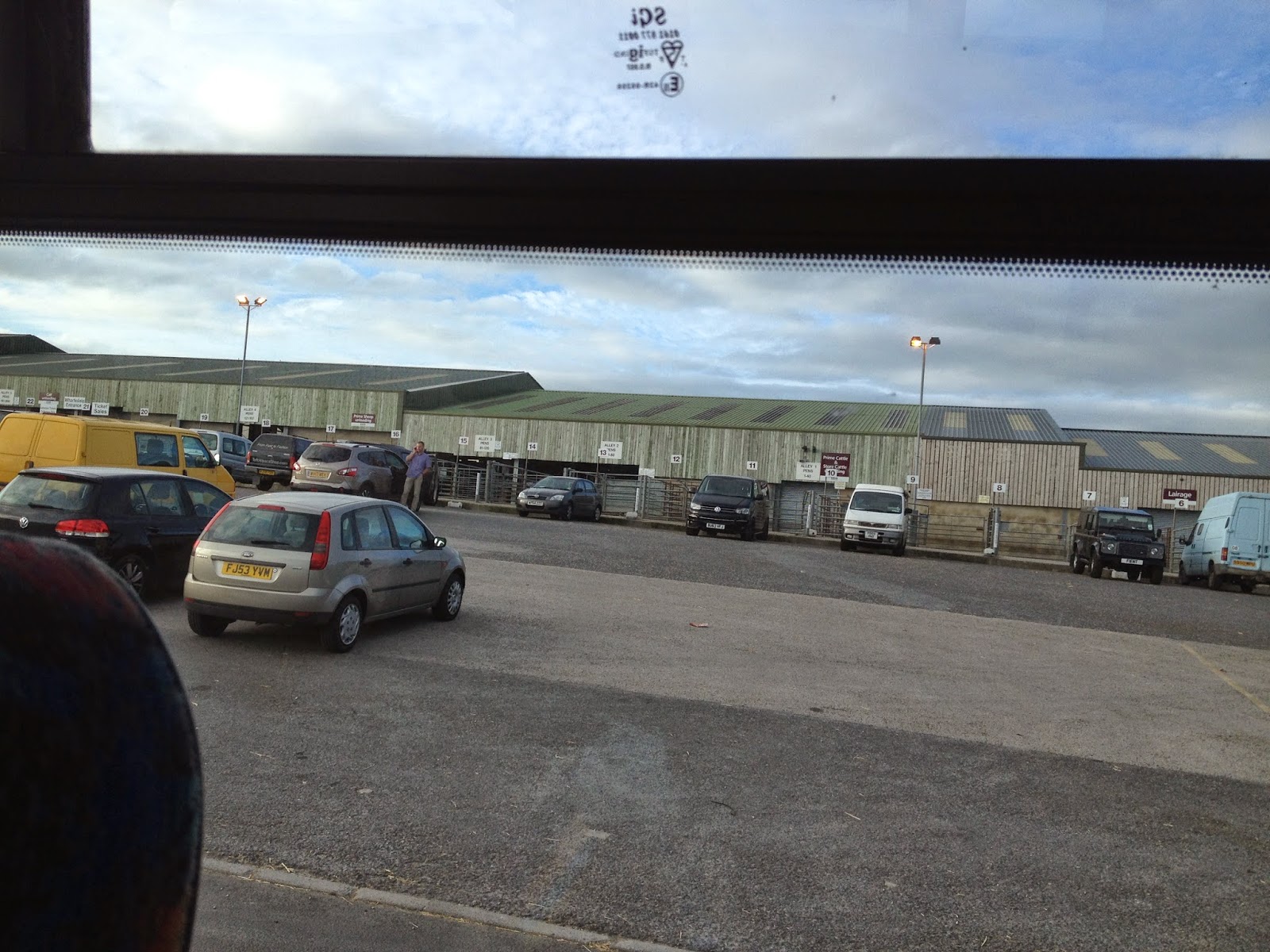 Fortunately we'd bought tickets in advance so only had to queue for a few minutes to get in. But even the queue had a sheepy theme. 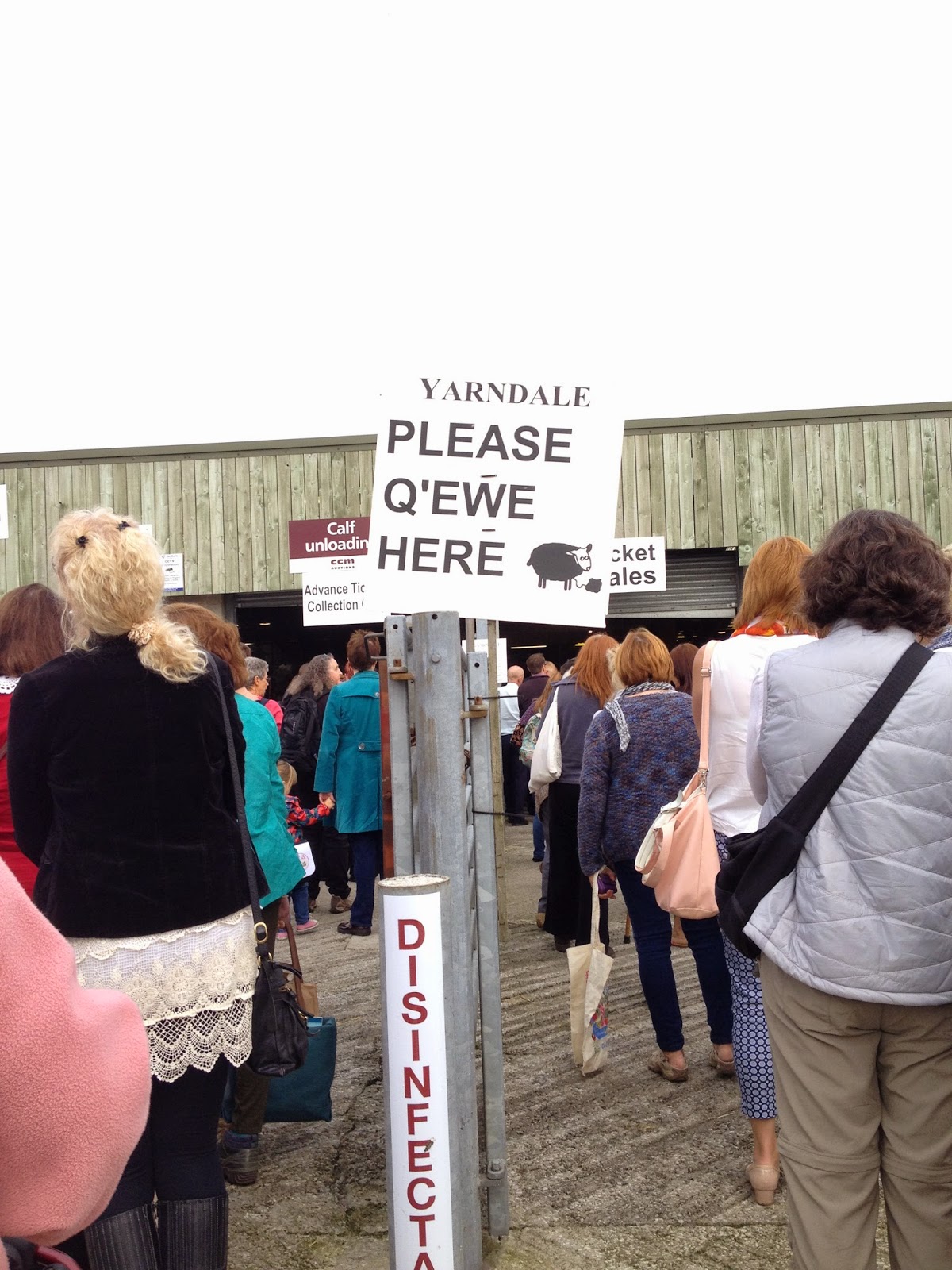 The local brass band played outside the buildings 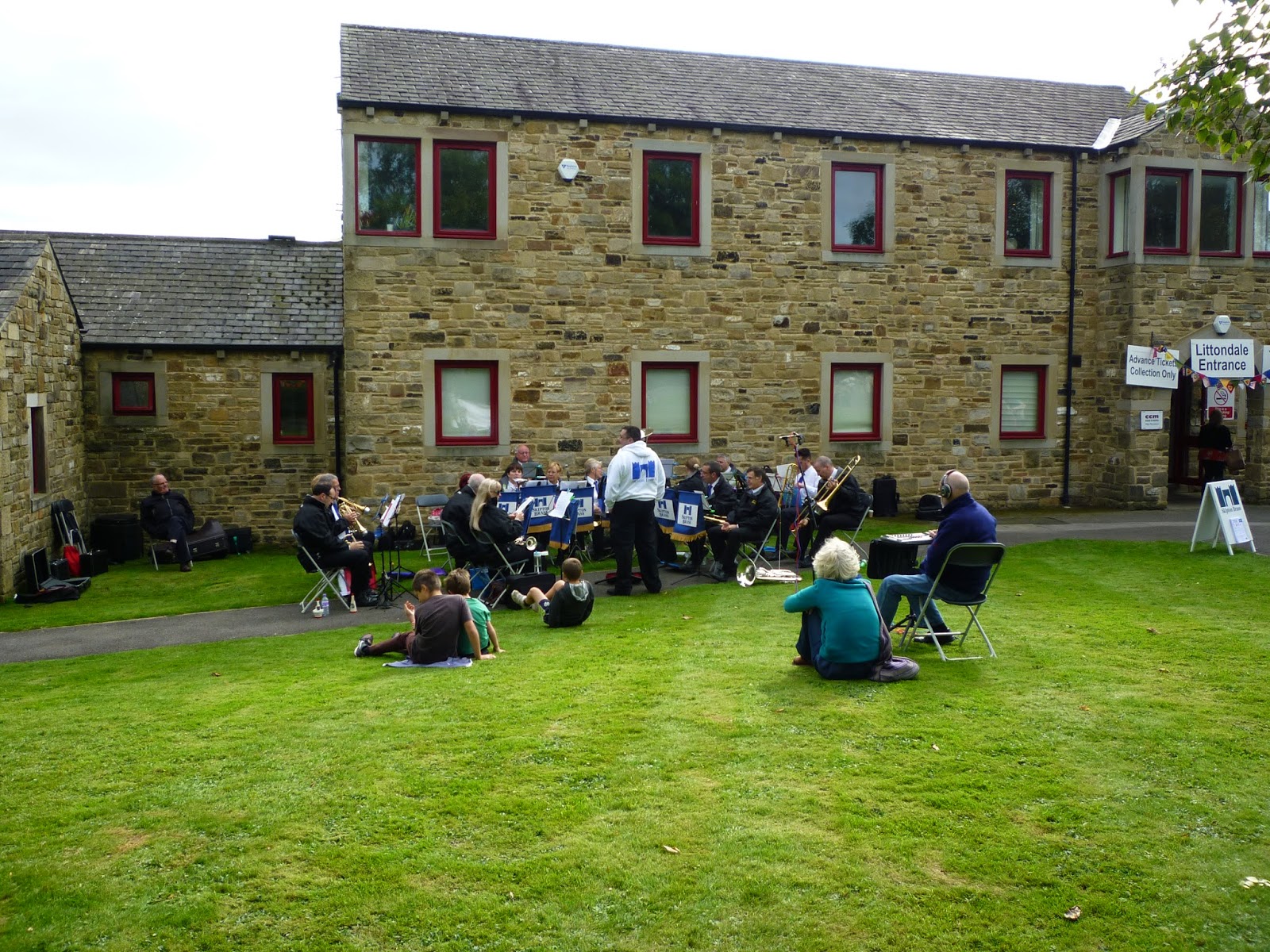 and the trees outside had been decorated. Apparently the walk from the train station (there was also a shuttle bus there if you didn't want to walk) through a park had also been yarn bombed, but I didn't see that bit. 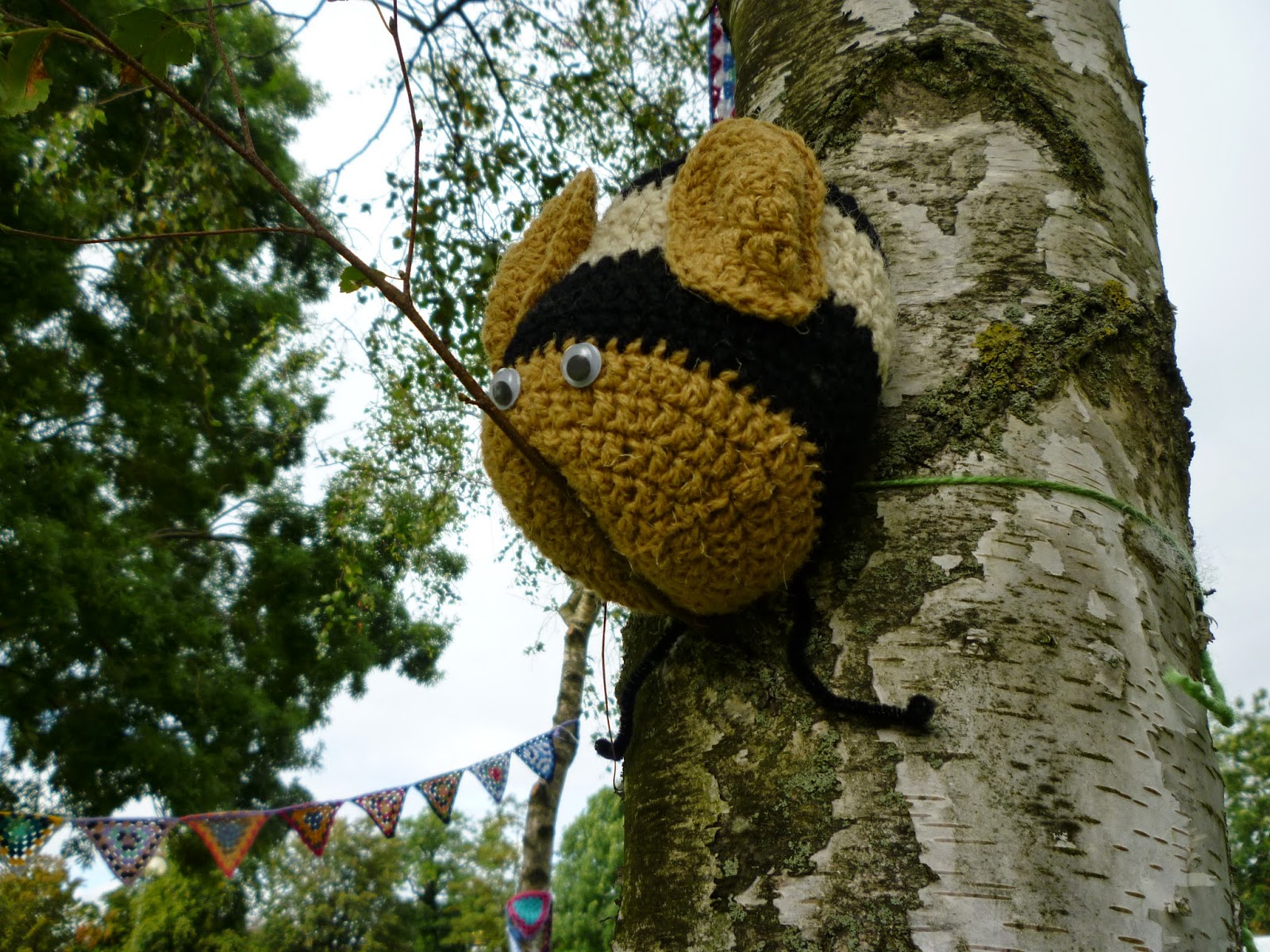 Inside the buildings had a distinctly rustic feel compared to other yarn shows I've been to, but this was a lot more fun, and also meant there was plenty of space to sit and knit, eat a packed lunch and catch up with friends, as several of the sheep pens had been given over to seating. These seating pens were distributed amongst the stalls, so it was never too far to have a bit of a sit down (I had a total stinker of a cold whilst I was there, so was going flump quite often). Although the whole venue is covered by a roof, it's open at the ends, so it didn't get too hot, like some exhibition halls I've been to for other shows. There were lots of loos this year too, and two cafes so it didn't take too long to buy a cup of tea and some cake for extra energy during the afternoon. 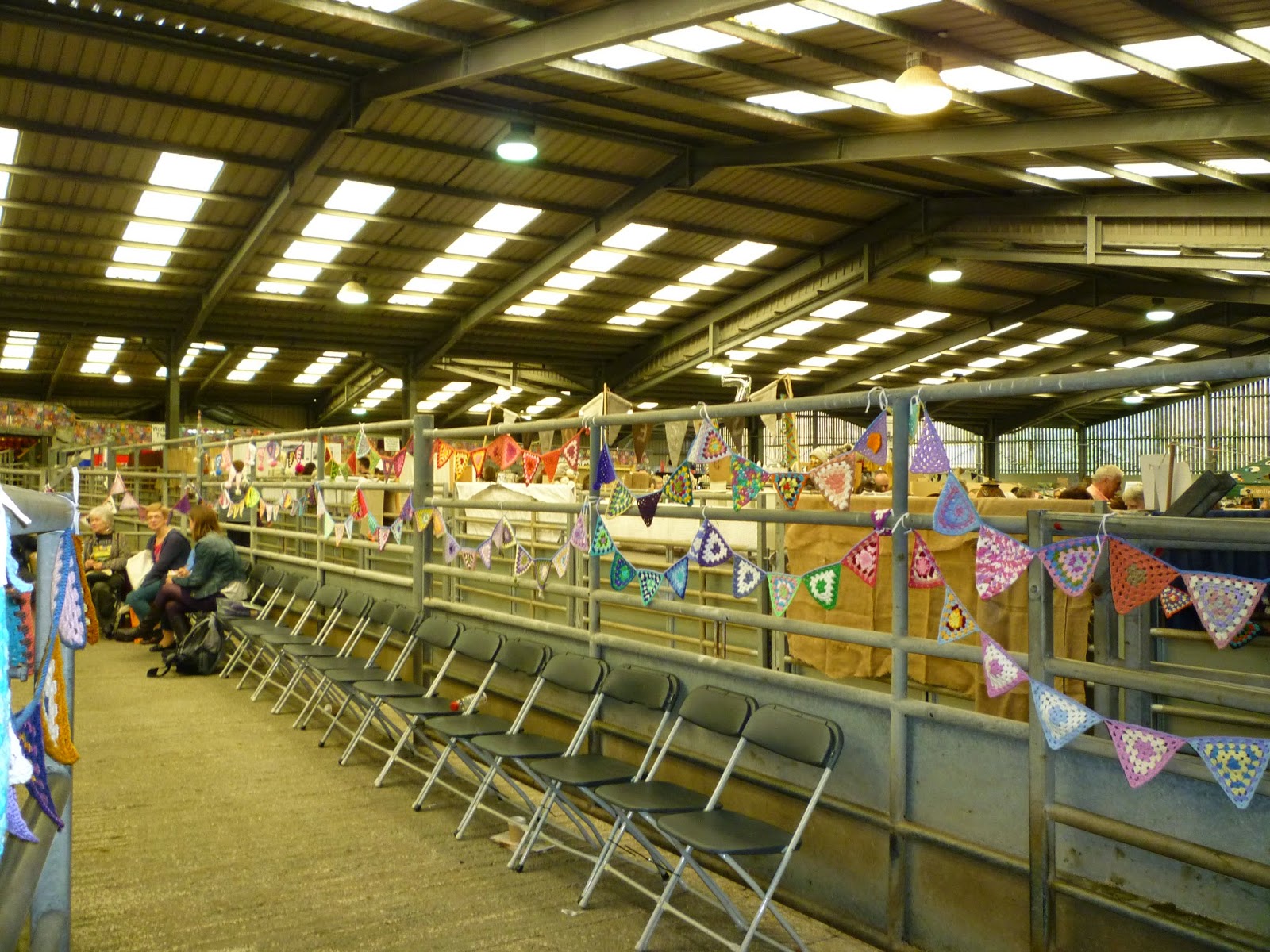 This is the Knit and Natter area at the centre, where there were also lots of seats around, and also the Wool Warehouse stall, selling Attic 24 yarn packs like they were going out of fashion. Apparently Lucy from Attic 24 was there as well, but I didn't spot her. I did find a librarian friend here, and was able to hand over the odds and ends of yarn I'd promised her (she only lives 30 minutes from me, but, of course, it was easier to bring it Oop North where I knew I'd see her). 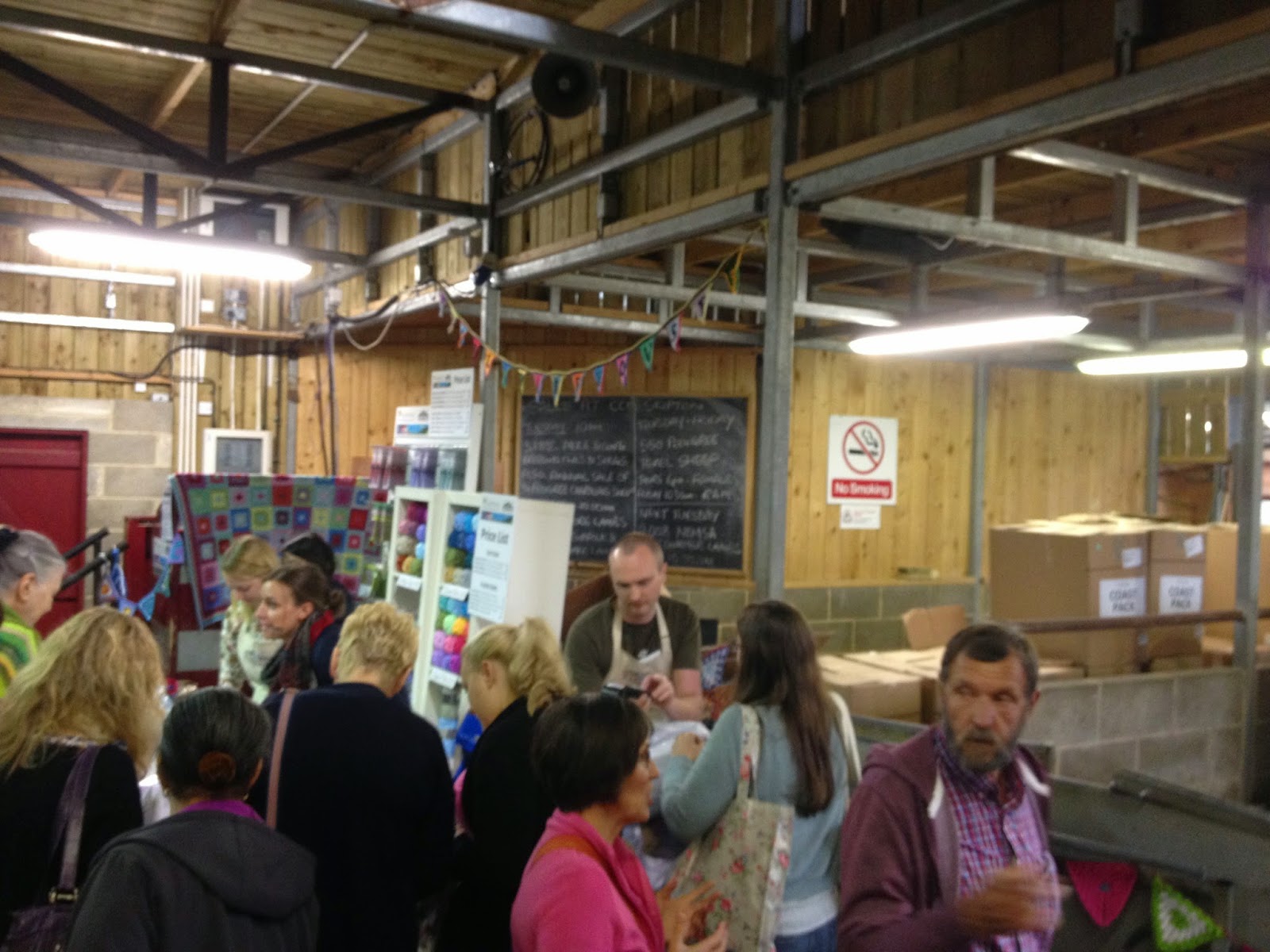 There were LOADS of stalls, and so much to see. We headed over first of all to the Knitting Goddess/NicsKnots stall, where we found Nic (who I hadn't seen for years). 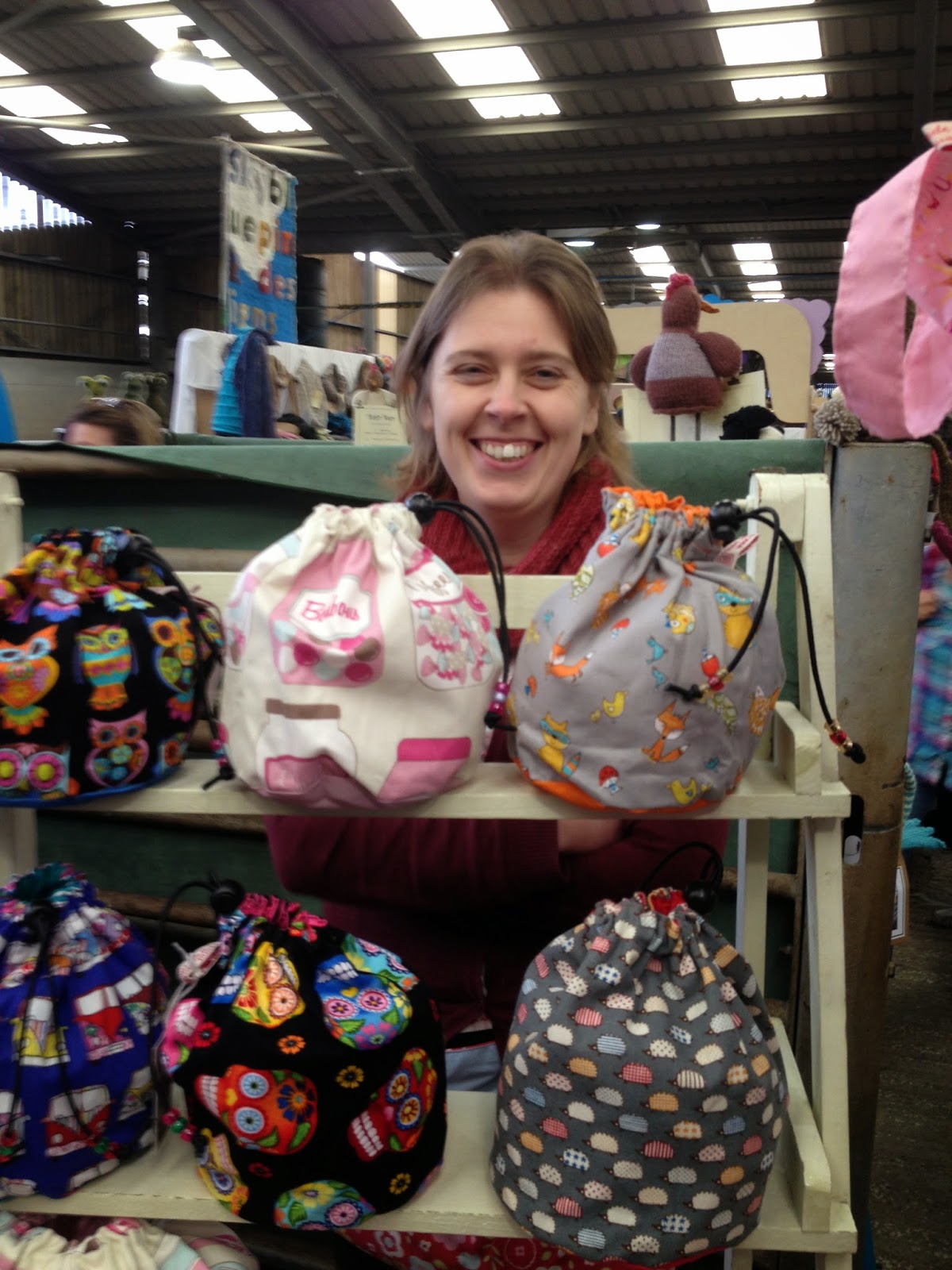 I bought one of the mini skein packs from the Knitting Goddess. This is "Shades of Grey". There's enough there (70g) for a pair of socks, or I thought the OH might like them for a woolly hat. 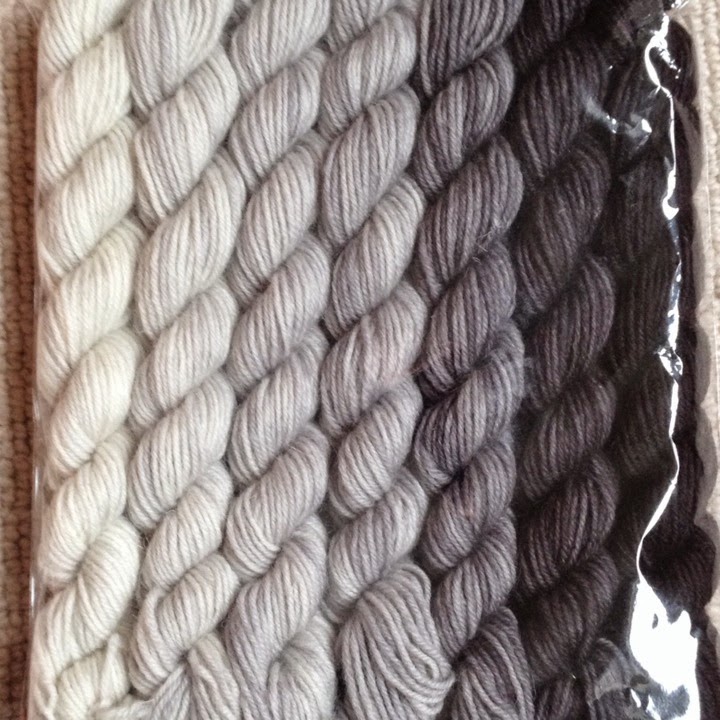 I kept forgetting to take pictures, so there are only a few pics of stalls, I'm afraid. It did get quite crowded in the middle of the day, which made it harder to take photos, but the beginning and end of the day were fine. 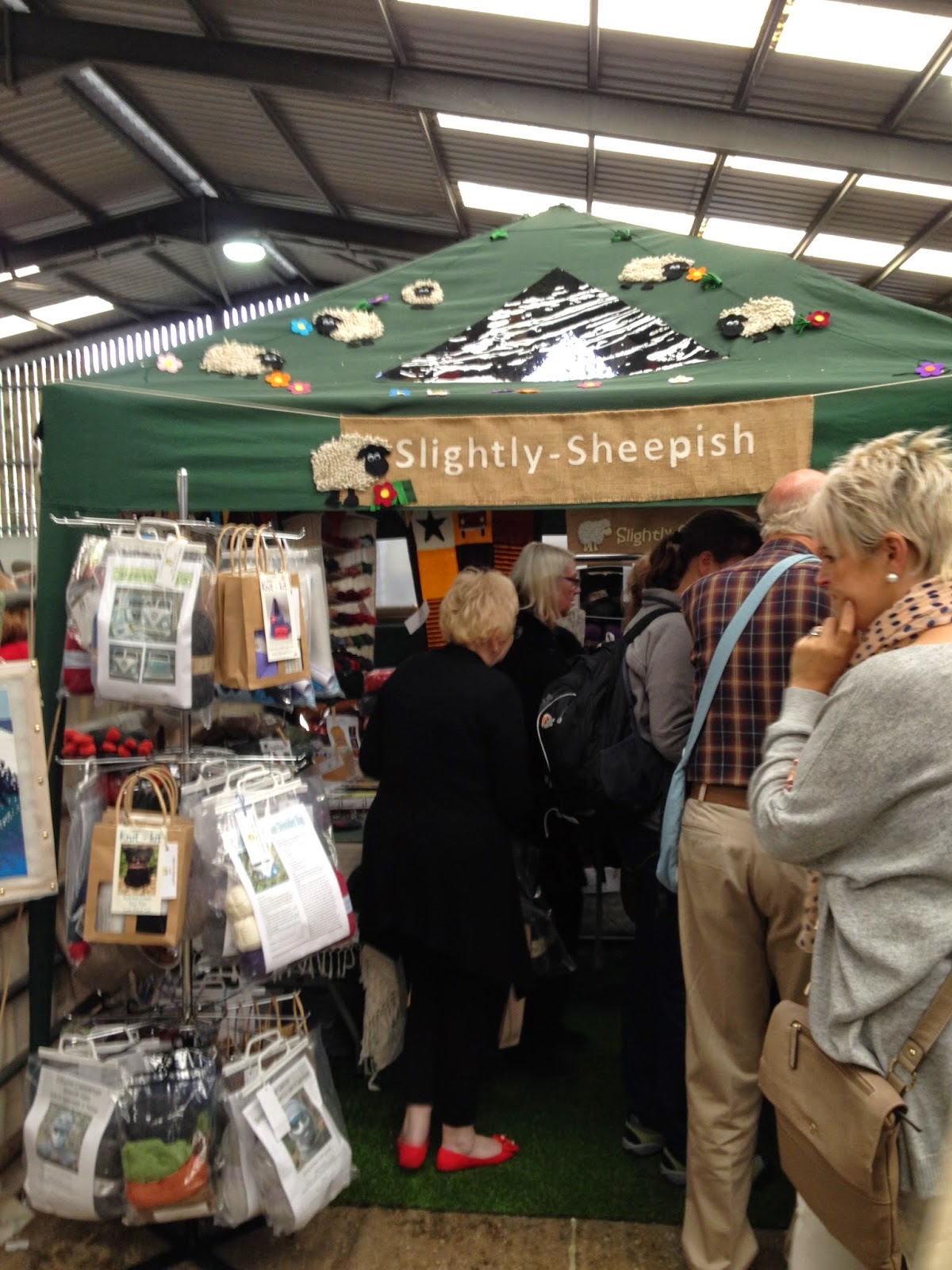 It's also hard to give an impression of the scale of it. There were rows and rows and rows of stalls, and so much colour and texture to take in. 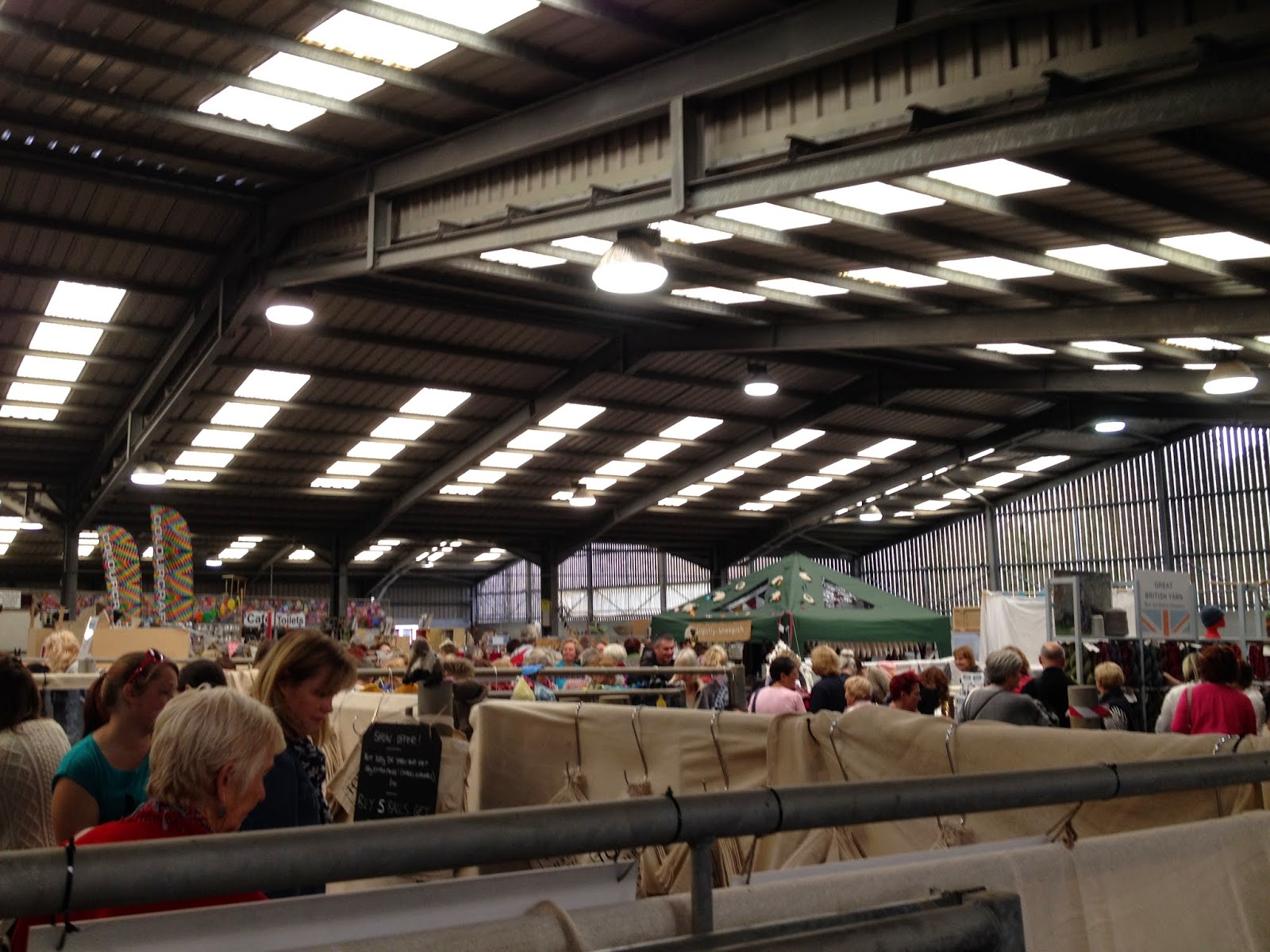 There were also ANIMALS to stroke! These are Shetland sheep. 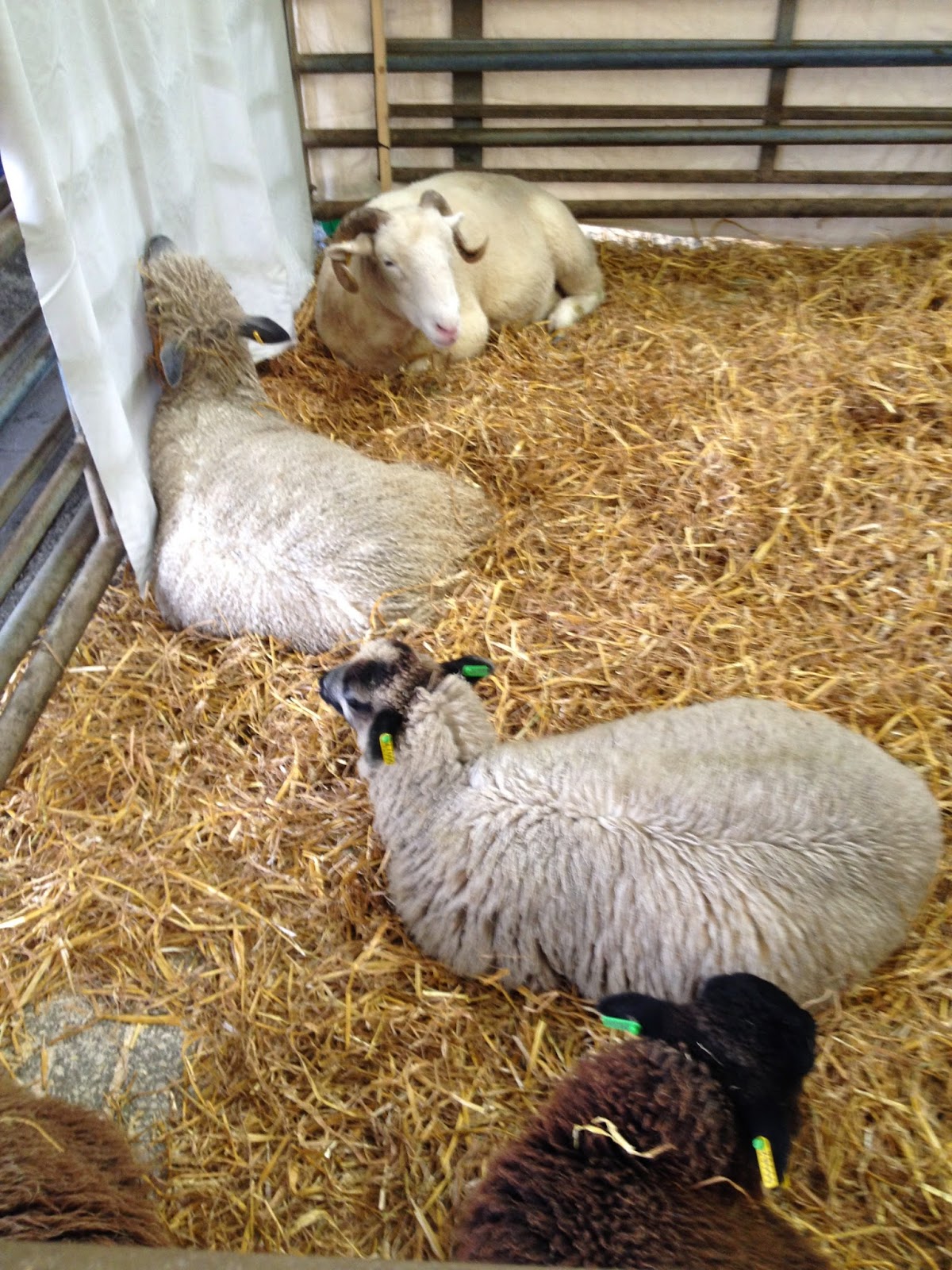 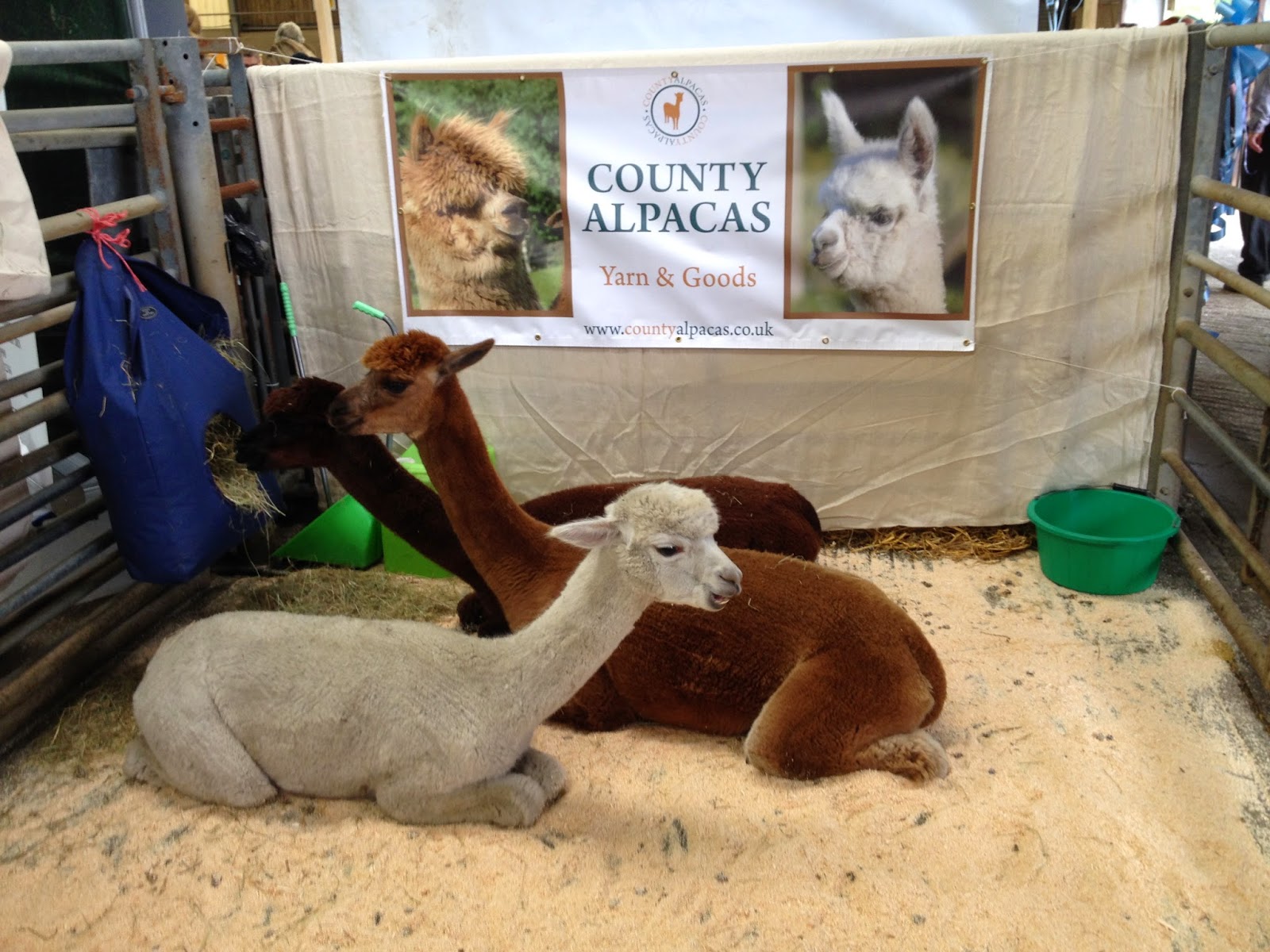 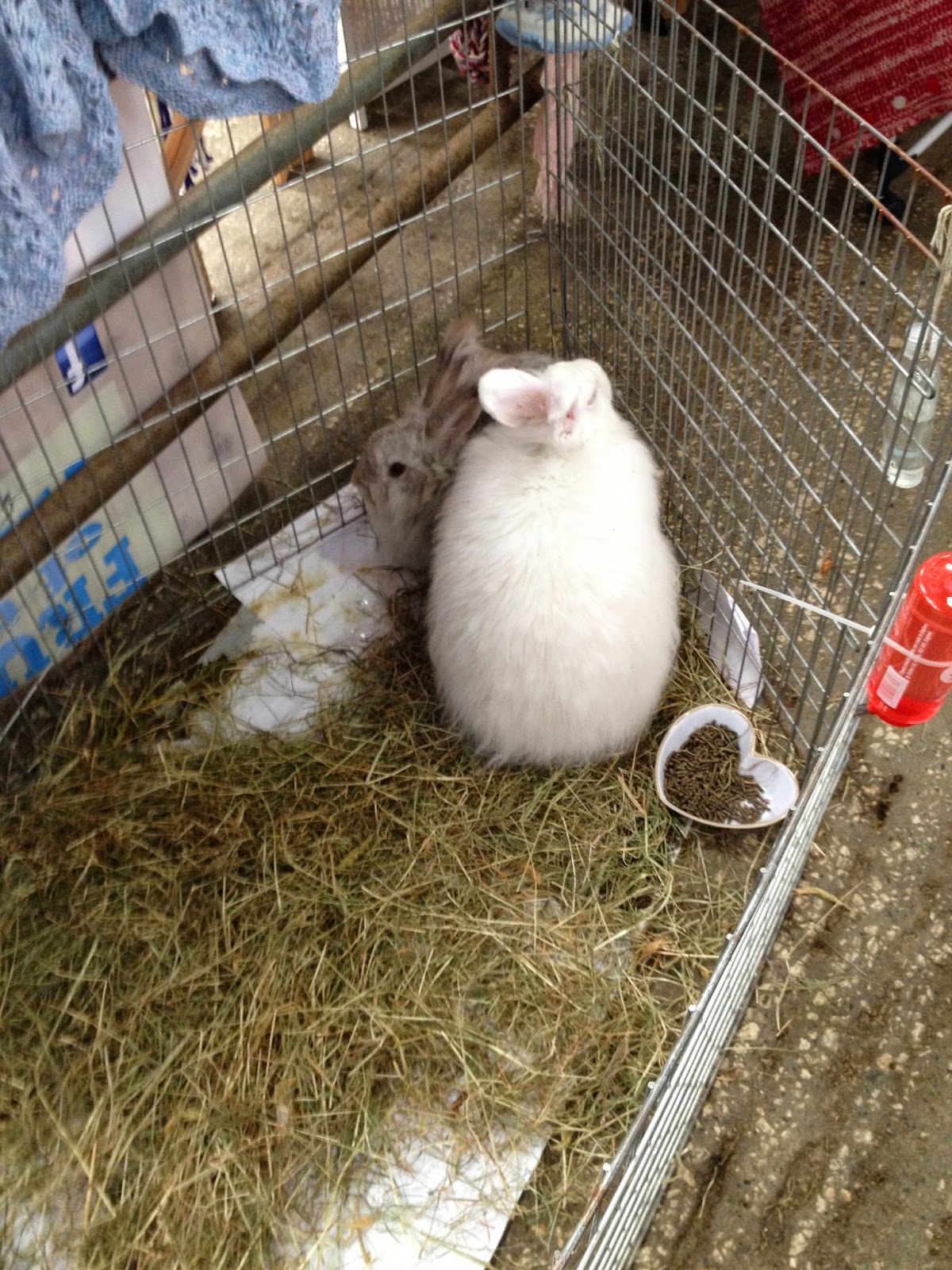 At one end of the show is a ring used to show livestock off in the auction, but for Yarndale the seats around the ring were available to anyone who wanted to sit and knit. People were very friendly and I got chatting to quite a few people whilst I sat there. In the centre tables were set up for the workshops, and there mostly seemed to be two workshops running at a time. 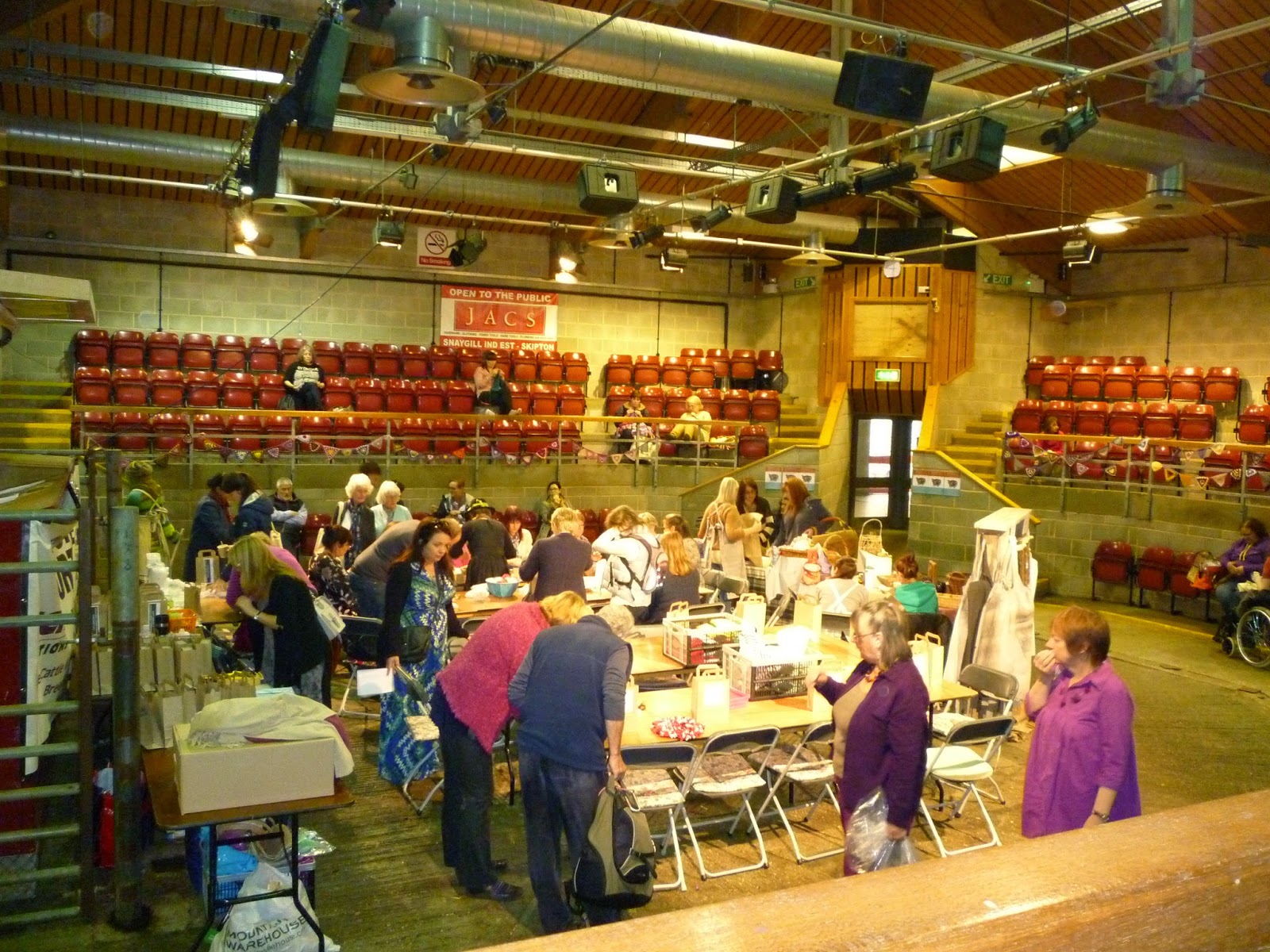 This is my knitting on the one we took - Latvian knitting techniques, were we learnt how to cast on in two colours and how to make our braids go one way and then the other. 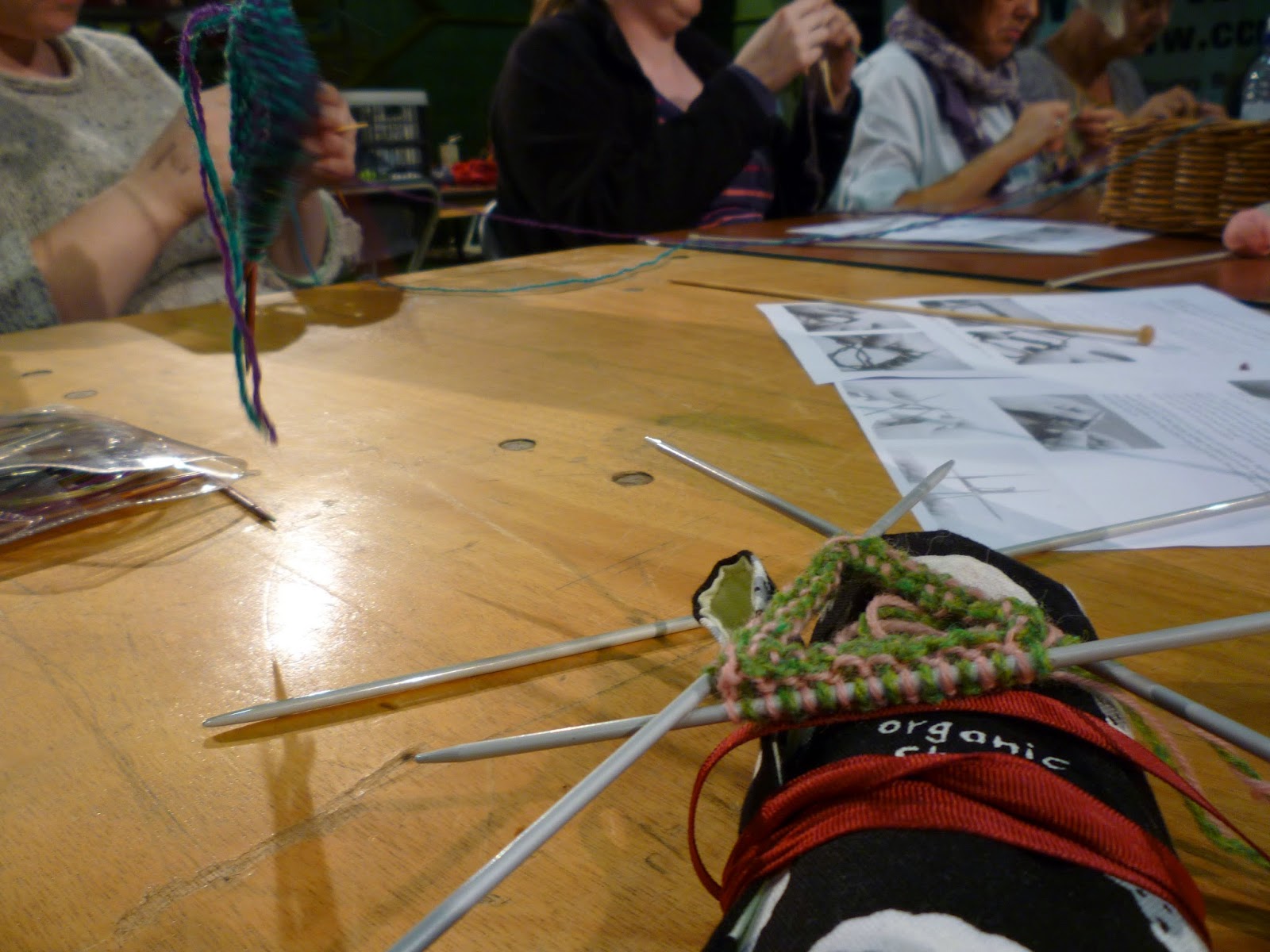 Oh, and what did I buy? Well, I am on a yarn diet, but I also knew there were various things I was keen to acquire, so I had a Strategic Yarn Acquisition Plan (I knew that leadership and management qualification I did earlier this year would come in handy, it's all about thinking strategically, you see). I'd like to make another shawl, but in 4ply yarn this time, but most of the shawls I've looked at need more than 100g of 4ply, and, of course, I've been acquiring it with socks in mind, so most of the sock yarn I have is only one 100g skein. So, I wanted to get 200g of sock yarn in a semi-solid or plain colour. I went all the way round all the stalls, squishing and stroking yarn as I went, and there were several I was very tempted by. However, it was the Triskelion yarn I fell for. I just loved the saturated colours and the man on the stall was very helpful whilst I wittered on about what colour to choose. So, I chose two skeins of the Taliesin 4ply (a superwash 100% Blue Faced Leicester yarn) in colourway Raspberry. 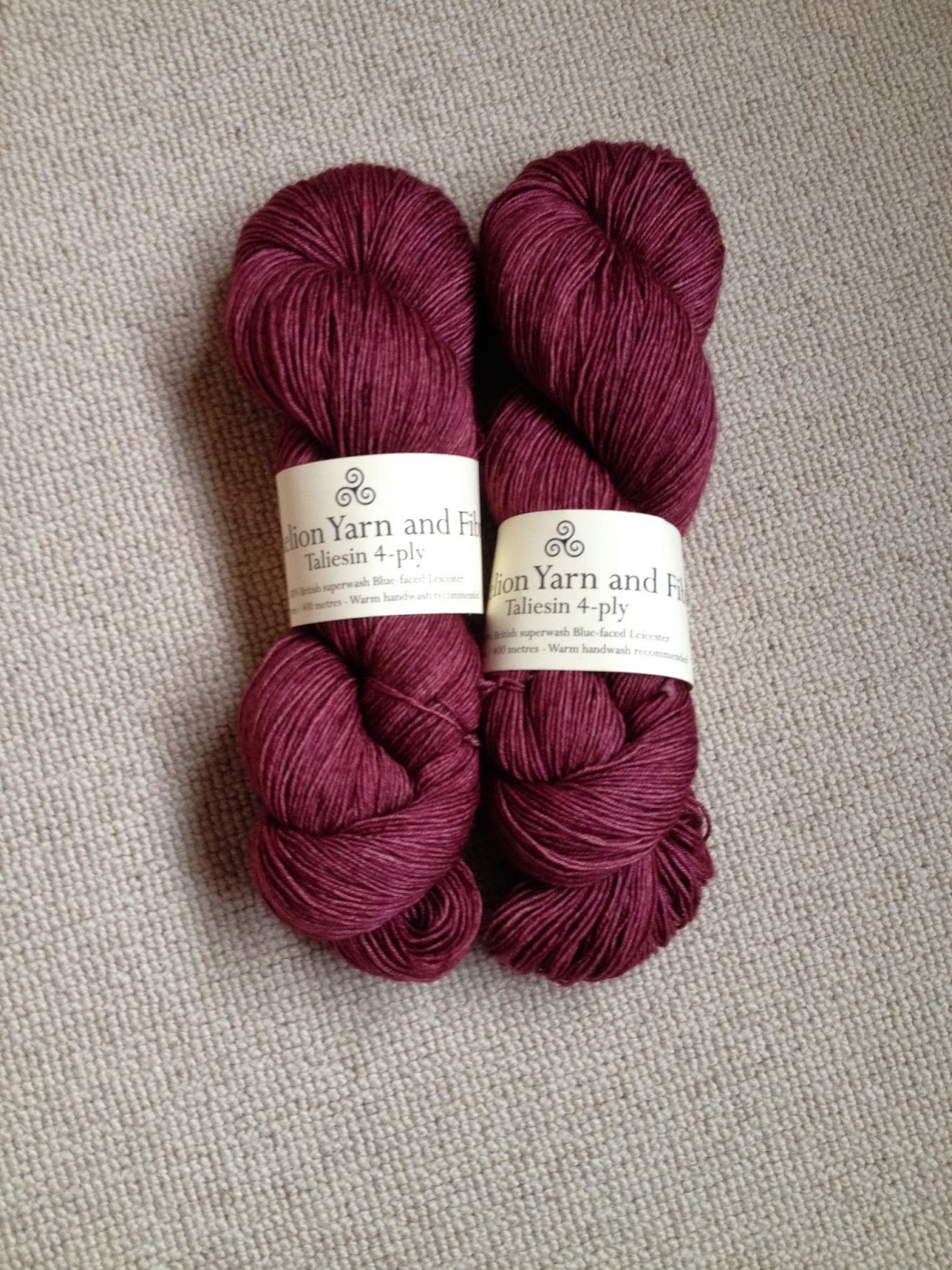 I also quite fancied some undyed yarn, as the kind person at knitting group who offered to bring me back some Kool-Aid from her trip to the US brought me back LOADS of it. Apparently it's very very cheap over here, whereas it seems to cost at least 50p a sachet here. So, working on the same principle of getting 200g of 4ply so that I could make a shawl, I revisited the Laxtons stall. They seem to have brought all their yarn manufacturing back to Britain, and had loads of lovely undyed yarns to choose from, in particularly gorgeous combinations. I chose two skeins of Falkland Fine Merino 4ply wool, which also seems to be available on their website, although you have to buy at least 500g there. This is slightly thinner 4ply than normal, as it has nearly 500m in a skein. 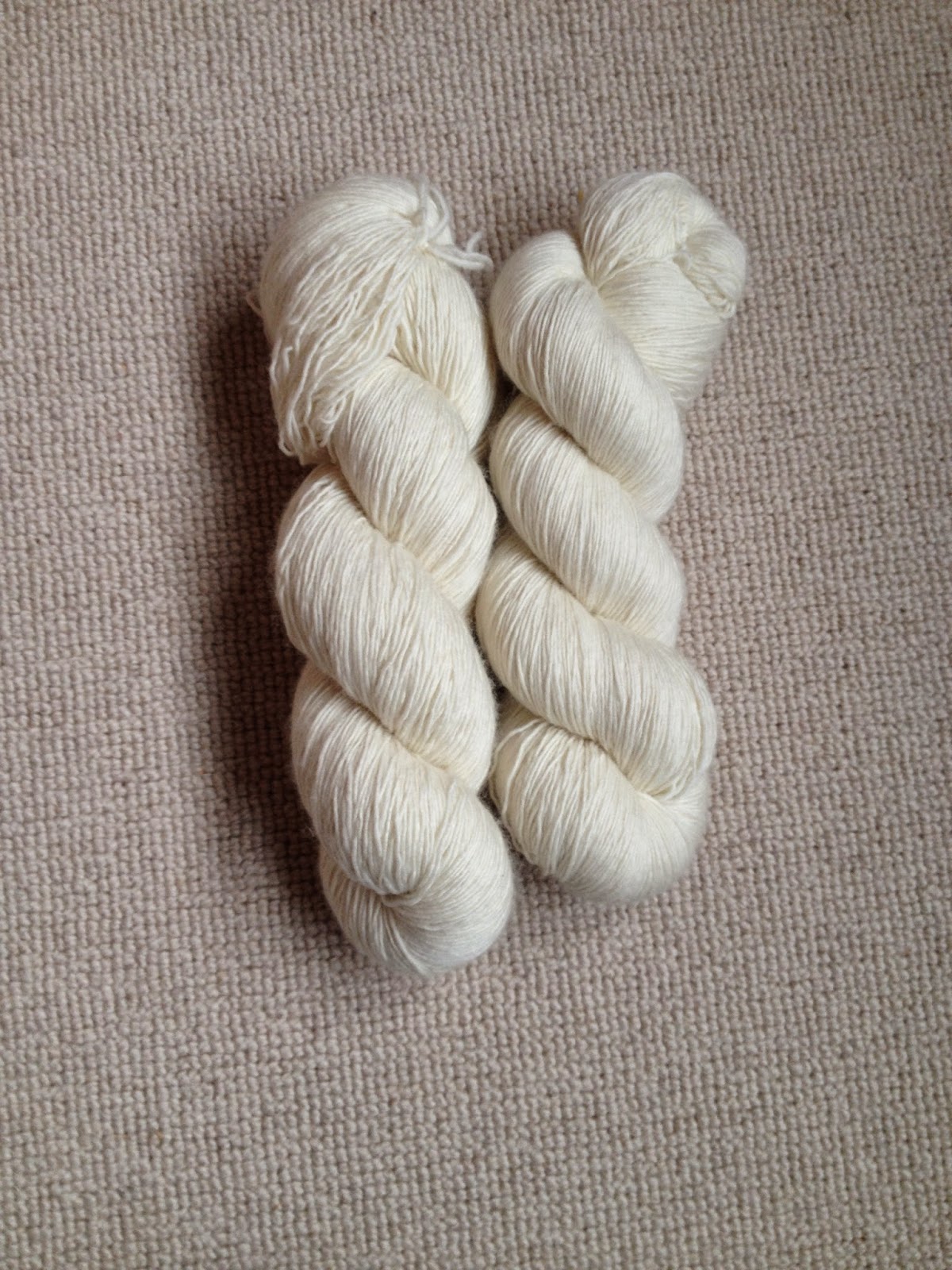 Finally, I got some new 4mm tips for my KnitPro interchangeable needles from the Knitting4Fun stand, as my current 4mm tips are now over eight years old and showing serious signs of wear. They had loads and loads of needles and gadgets on display. And I got some sweet little greenish bird buttons from Injabulo, which should work perfectly for my garter yoke cardigan. 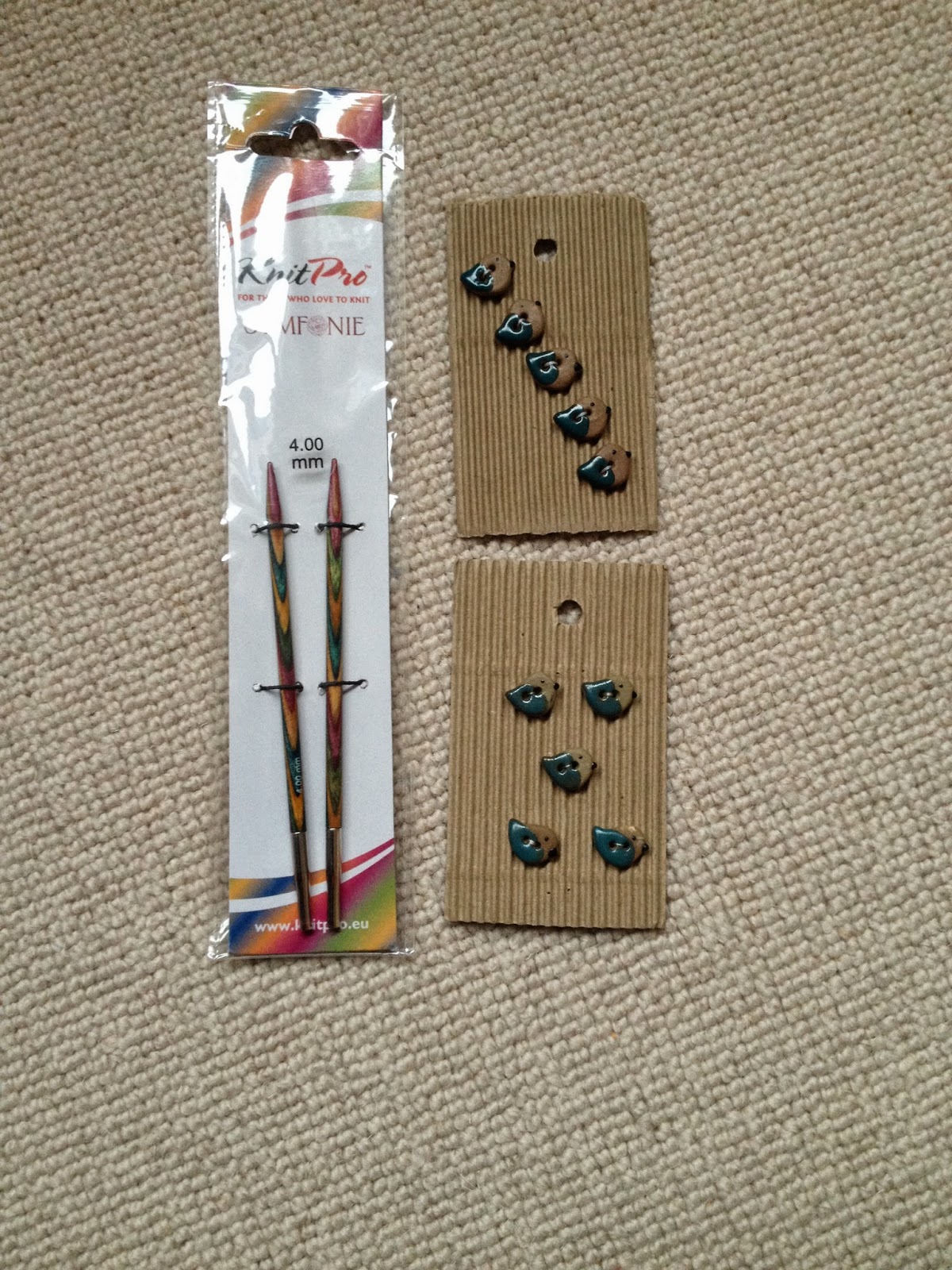 Phew, I think that's everything blogged about. I wish I'd remembered to take more pictures inside the show. Would love to go next year as well - it had such a different atmosphere to the other shows I've been to.
Posted by Daisy at 6:01 pm

Looks quite fun! I've never been to any sort of wool or sheep festival. There are none nearby, that I know of, anyway. I'm excited to see the shawl you end up knitting!

Oooh, it looks so fun! I really have to make sure that I go next year. Skipton isn't even all that far from where we are...

And I love the raspberry coloured yarn you bought - so stunning!

Thanks for reviewing, I'm not familiar with that event but now I would like to go. Lovely sock yarn as well!